What Farmworkers Need to Know About Weed Killer Exposure Lawsuits

Thousands of weed killer exposure lawsuits have been filed around the country alleging that the makers of weed killers Round-up (containing glyphosate) and Gramoxone (containing paraquat) have made and sold these products for decades with the knowledge that these products can cause serious and even fatal injuries to persons exposed to these products.  Since both of these products are commonly used around crops and farms as weed killers, the likelihood that career farm laborers have been exposed to one or both is extremely likely. However, many times the laborers hired to tend the crops and apply insecticides and weed killers are handed pre-filled generic applicators and, thus, may not know what chemical they worked around at any particular moment. As a result, some farmworkers may be reluctant to pursue these claims.  However, while both of these weed killers are used as herbicides, they vary in their makeup and, as a result, have different harmful effects when humans are exposed to certain levels of these chemicals. Thus, sometimes the resulting condition is the evidence of what weed killer was used and can help prove the case for reluctant farmworkers. 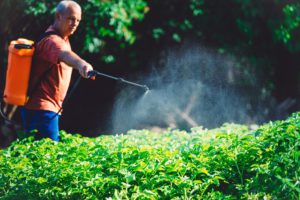 Thousands of weed killer exposure lawsuits have been filed against Monsanto, the maker of Roundup alleging a link between the chemical glyphosate and non-Hodgkin lymphoma. Roundup has been in use since around 1974.  Glyphosate in Roundup blocks the production of certain enzymes needed to produce amino acids in plants. Ultimately, this causes the plants to wither or dry up and die.  It is not only used on weeds as a killer but on crops as a desiccant—an agent that makes the plant part of the crop dry out faster and harvest easier.

Farmworkers and others who were exposed to Roundup either regularly or in a large quantity, and were subsequently diagnosed with non-Hodgkin’s lymphoma, may have a claim against Monsanto for their failure to warn of the link between Roundup and cancer.  However, time is running out on these claims.  After a 2 billion dollar verdict was rendered against Monsanto, they began settling many of the claims that Roundup exposure causes cancer. Approximately 80% of all pending claims have been settled and many lawyers no longer take these claims.

Rather than pull this dangerous product from the shelf or stop using glyphosate, Monsanto simply changed the warning label and continued to sell the product where allowed. Roundup has been banned in 20 countries and several states have restricted or prohibited it for certain uses in the United States. In a recent announcement, Monsanto indicated that they will stop selling Roundup with glyphosate by 2023 and will change the formula at least in the United States. However, they indicated they are doing this to “manage litigation” not out of safety concerns.

Gramoxone, like Roundup, is both a weed killer and a crop desiccant. It has been used regularly around farms and on crops for many years as well. Gramoxone, however, has a different active chemical called paraquat. Studies done over the last 20 years have indicated that there is a link between Parkinson’s Disease and exposure to paraquat. One study found that the use of paraquat within 1600 feet of a home increases the residents’ risk of developing Parkinson’s Disease by 75%.

A number of paraquat lawsuits have already been filed by paraquat exposure lawyers and their clients. Lawsuits are steadily mounting up against the three makes of Gramoxone–Syngenta Crop Protection, LLC., Syngenta AG, Growmark—as well as other companies involved in the manufacture and distribution of Gramoxone. Many of the victims are farmworkers who applied paraquat regularly for work and then were later diagnosed with non-Hodgkin’s lymphoma.

The above findings and lawsuits have not prompted the makers to discontinue making and selling paraquat as a weed killer nor have they prompted the FDA to ban the use of paraquat-containing products. Instead, the FDA placed limitations on how it may be applied and how much time it must be given to dissipate before farmworkers may tend the crops sprayed with paraquat.

Non-Hodgkin’s lymphoma and Parkinson’s disease are very different medical conditions.  The diagnosis of one or the other points the victim’s attorney in the correct direction for trying to determine what the victim was exposed to and can be very helpful to a paraquat exposure lawyer or a roundup lawsuit attorney in deciding what investigation needs to be done.  Some unlucky farm laborers may have both conditions due to having been exposed to both Gramoxone (paraquat) and Roundup (glyphosate) and on the job. Victims may call Simmons and Fletcher, P.C., Injury & Accident Lawyers to be connected with a weed killer exposure lawyer who can advise them of their options.