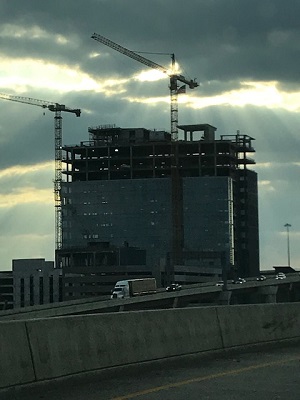 On October 5th, 2020, a concrete stairwell inside a 15-story building construction project collapsed killing three workers and injuring a fourth. This incident happened in the building being constructed on Town & Country Way between the CityCentre and I-10. The building is the future home of the Marathon Oil Company.

A recent inspection by City Officials had been done the Friday before, so it is currently unclear what caused the stairs to collapse.  Fortunately, concrete structure collapses such as this are not common. Usually, when you hear of a collapse in a construction site accident, it is a crane boom collapse or a scaffolding collapse.  While those can be just as deadly, they may not carry the kind of destructive force as 13 feet of falling concrete.

Generally, when a concrete structure like this collapses, there are many potential causes. Some of those include:

Unfortunately, determining the real cause of a construction collapse can be slow and difficult when all that is left behind is a pile of rubble.  OSHA, City inspectors, HFD, and other government agencies are all working to sort it out.  In addition to this, a lawsuit was filed on October 8, 2020, by the families of two of the deceased workers killed in the construction site collapse. In an accident like this, a work injury lawyer can often be beneficial in getting to the bottom of the root cause by taking depositions and hiring experts to examine and evaluate the evidence.

In the meantime, our hearts go out to those injured and those who lost loved ones. Simmons and Fletcher, P.C. once officed in the office buildings that were located there prior to our relocation just down I-10 to the Memorial City Mall area.