Houston, TX (September 29, 2021) – An elderly woman died when the car she was riding in drove off an overpass on Wednesday, September 29th in the downtown Houston area.

The crash took place in the inbound lanes of the Southwest Freeway near McGowen Street.

One vehicle was traveling southbound on Hamilton Street as another vehicle was driving eastbound along Pierce Street. According to the Harris County District Attorney’s Office, one of the vehicles ran a red light.

The car on Hamilton Street crossed the barrier and continued onto the Southwest Freeway, landing on the highway’s embankment.

The other vehicle remained on the roadway.

Officials do not believe that driver impairment played a role in this crash. It is still unclear which car ran the red light and why.

All lanes were closed down for several hours as police investigated and crews worked to clear the area. 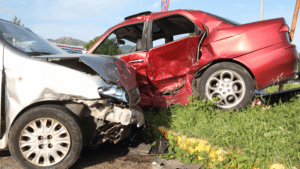 Recent data from the Texas Department of Transportation shows that, in 2018, over 12,000 car crashes took place throughout the state leaving approximately 15,000 victims with some degree of injury.

Serious injuries and deaths caused by these accidents are a seemingly unending problem in Houston, San Antonio, and other densely populated cities statewide. In these metropolitan areas, the increased traffic on major roadways brings with it an increased number of motor vehicle accidents.

Texas car accident victims often endure long-term physical handicaps, exorbitant medical bills, loss of income and benefits, and even death. When victims die, grieving families must pick up the pieces. But victims and their families can and should contact an injury lawyer in Houston for guidance.

In some instances, an experienced Texas personal injury attorney can help victims get justice. You might be eligible to file a personal injury or wrongful death lawsuit after the negligence of another driver causes you harm.

If you’ve lost a loved one due to an accident that occurred through no fault of their own, talking to a dedicated car accident lawyer in Houston is in your best interest. An attorney can review all of the details surrounding your case. Your legal team will then decide if you have the right to pursue compensation.

Furthermore, an attorney will craft their advice to match your exact needs. Whether you’ve sustained injuries yourself or lost a family member, it is important to reach out to a skilled lawyer. You don’t have to endure the aftermath of a wreck alone.

Insurance companies are not on your side after an accident. Additionally, adjusters may not offer you enough compensation to cover your losses. Make sure that you protect yourself and your family right from the start. Contact a lawyer to protect your victim’s rights and the rights of your family members today.