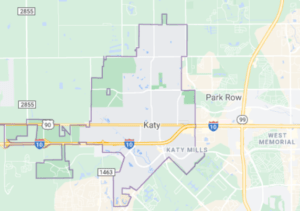 Dog bite law varies from city to city due to variances in municipal codes.  If you are attacked by a dog within the City of Katy, your case is subject to the Katy Municipal Codes.  The Katy dog bite codes include both dog leash laws and dangerous dog laws.  Since both may affect your case, below is a discussion of the applicable Katy Codes.

The Katy leash law is found in article 2.200.  Katy Code Sec. 2.202, prohibits any person having control or custody of a dog to allow the dog to run or be at large upon any public property within the corporate limits of the City of Katy.  “At large” is defined by Sec. 2.201 as:

(1)     not under the control of the owner either by a leash, chain, cord, or other suitable material attached to a collar or harness; or

(2)     not restrained securely within an enclosure or fence.
Sec. 2.203 further extends the prohibition to private property other than fenced property belonging to the dog owner.  This means that even if the dog is in another’s fenced yard, with permission, the leash law applies.  Failing to abide by this law is a misdemeanor punishable by a fine up to $500.00 per offense.  There is an exception to this rule if the dog is running at large in a dog park designated as such by the City of Katy. See Sec. 2.223.  For purposes of civil liability, a dog owner could be found to be negligent as a matter of law if their dog bites someone resulting in personal injury while “not under the control of the owner by some form of a leash and not within the owner’s enclosure or fence.

It appears that they are saying that any dog (or cat) that bites, scratches, or otherwise attacks a person can be found to be a dangerous dog unless the victim was trespassing on the owners land or the victim can prove beyond a reasonable doubt that the dog was provoked by the attack victim.  The importance of the latter part is that the burden to prove provocation is shifted from the injured person to the dog owner.  Provocation effectively becomes an affirmative defense that must be proved by the dog owner.

The statute then goes on to define “dangerous dog” as a dog that:

(1)      Makes an unprovoked attack on a person that causes bodily injury and occurs in a place other than an enclosure in which the dog was being kept and that was reasonably certain to prevent the dog from leaving the enclosure on its own; or

(2)      Commits unprovoked acts in a place other than an enclosure in which the dog was being kept and that was reasonably certain to prevent the dog from leaving the enclosure on its own and those acts cause a person to reasonably believe that the dog will attack and cause bodily injury to that person.

Part (b) further explains that the threat required for subpart (2) above “must suggest the real danger of being bitten” before animal control will get involved.

Once a person learns he has a dangerous dog he has a duty to:

(1)      Register the dangerous dog with the animal control officer;

(2)      Restrain the dangerous dog at all times on a leash in the immediate control of a person or in a secure enclosure; and

(3)      Obtain liability insurance coverage or show financial responsibility in an amount of at least $100,000.00 to cover damages resulting from an attack by the dangerous dog causing bodily injury to a person.

The statute does not say that once a person is notified by animal control he has a dangerous dog he must act, it uses the word “learns.”  Thus, a strict reading of the ordinance suggests that if the owner is aware of an attack, whether it was reported or not, he is obligated to take action to register and restraint the dog and obtain liability insurance.  This puts the burden on the dog owner to report any attacks or bites.  If the dog is found by the courts to be a dangerous dog, it is additionally required to wear a bright orange collar with the words “dangerous dog” at all times and it is required to be caged with appropriate warning signs. See Katy Code of Ordinances 2.302(c).  There are further restrictions requiring reporting if the animal is moved or relocated.  An owner who has a dangerous dog can be held criminally responsible for an attack under section 2.304.  It is a crime punishable by Class C Misdemeanor unless it causes serious bodily injury which is a Class A Misdemeanor.

Talk To Our Dog Bite Lawyers

At Simmons and Fletcher, P.C., we take dog attacks seriously.  There is simply no reason a responsible animal owner cannot maintain control of his pet.  If you have questions about how the Katy Code of Ordinances applies to your situation and would like to talk to a dog bite attorney, give us a call.   We are located next to the Memorial City Mall, near I-10 and Beltway 8, just a short drive from Katy proper. The initial consultation is free and we do not charge you a dime unless we win your case.