Recording Phone Calls Without Consent: Where Technology and Law Collide 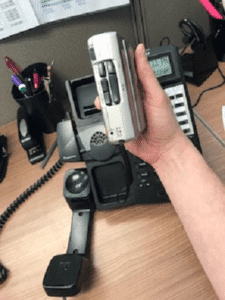 Is it Against the Law to Record a Telephone Conversation if You are Not a Party to the Call?

It is against federal law for an individual to record a telephone conversation he is not a party to. This is known as wiretapping—a form of eavesdropping. Persons convicted of wiretapping may receive up to five years in prison, $250,000 in fines as well as civil penalties for damages, punitive damages, attorney fees.

Can a Personal Record a Phone Call Without Consent?

Whether a person may record a phone conversation to which he is a party without the consent of other parties depends upon what state the parties are located in. Under federal law, a telephone conversation may be recorded so long as one party to the conversation consents. The rest of the people involved do not have to be advised that the call is being recorded. 18 U.S.C. § 2511(2)(d). However, some states have further restricted this to require that all parties be made aware of the recording.

States with laws that allow the recording of a phone conversation so long as one party to the call consents are known as one-party consent states. States with laws that require all people involved in the phone call to consent before recording is lawful are known as all-party consent states. These laws are easy to follow if everyone is using a landline, but with so many people cutting the cord on their home landlines and opting to have only a mobile phone, this can be a little more tricky.

The states that are one-party consent states are as follows:

The all-party consent states are:

If you are going to record someone, you are responsible for complying with the state laws that all parties are situated during the call. This is not always as simple to follow as it would seem. With the rise in mobile phone use going up year-after-year, many times you do not know whether the number you are calling is a landline or a mobile phone. This means that just because you called someone in Katy, TX who has a Katy, Texas prefix in their phone number, does not mean that person is in Katy, Texas. They may be in another state. They may be traveling across states while talking on the phone.  You are responsible for complying with the law of every state that every other party to the conversation happens to be in at any point during the conversation.

The potential for legal liability is great. Not only could you wind up in jail for illegal wiretapping, but you could also get sued for invasion of privacy.  This is why many insurance adjusters ask for your permission first to record your statement of what happened in an auto accident. Once they have your permission, they are clear of legal liability and free to record you making an oral settlement agreement or answer tricky questions about your case.

Even if you record someone legally, you may still be subject to civil liability for the disclosure of private information. If the person has a reasonable expectation of privacy, you may very well get sued for invasion of privacy, slander, or other civil causes of action.  Thus, it is not wise to make a practice of recording phone conversations.

Additionally, before considering whether to attempt to record a telephone conversation, you would be wise to consult an attorney for specific advice on your situation.

As a last and final thought, attorneys may be held to a higher standard of conduct by their State Bar. Attorneys would be wise to contact their local State Bar Ethics Committee to determine whether recording a person without consent is permitted by their State ethics rules.