In February, Marvin Drake III died after slamming his motorcycle into the rear end of another vehicle at a high rate of speed. In May, Houston Police Department (HPD) Officer Chayne Brothers was hit by a car while on duty, suffering two broken wrists. At first glance, these two incidents seem to have little in common. However, over the past few weeks, Drake’s family and Officer Brothers have both filed lawsuits against Bombshells sports bar, making nearly identical allegations in separate Bombshells lawsuits.

Drake was intoxicated at the time of his fatal accident and is believed to have been traveling at speeds up to 150 mph. The deadly crash occurred just moments after Drake left the Bombshells location on the Gulf Freeway. Jeremy Leos, the driver who injured Officer Brothers, had also just left Bombshells. Each lawsuit alleges that staff at the sports bar “over-served” the driver, or continued to serve alcohol to a person who was obviously intoxicated. 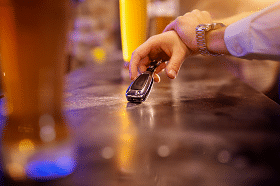 Both of the Bombshells lawsuits seek damages under the Texas Dram Shop law, a statute that creates civil liability for licensed providers of alcoholic beverages if:

• The bar or restaurant continues to serve alcohol to a patron who is obviously intoxicated or serves alcohol to a minor, and

It’s common for state Dram Shop Acts to provide a cause of action against the establishment when a third party is injured, as in Officer Brothers’ case. A third party injured by a drunk driver or in some other way injured as a result of the overserving and resulting intoxication is generally an innocent victim of the combined negligence of the intoxicated person and the establishment that provided the alcohol.

However, Texas law is unusual in providing for first-party claims like the one filed by Drake’s family. In some states, no cause of action arises for injury to the person who chose to consume alcohol.

As in most personal injury and other negligence-based cases, the liability of the bar or restaurant is limited to its pro-rated share of responsibility for the injury. For example, if a jury determines that Bombshells was 30% responsible for the injury to Officer Brothers, but that the drunk driver himself bore 70% of the responsibility, then the bar will be liable for only 30% of the officer’s damages. The remainder of the liability will fall on the driver.

These Bombshells lawsuits alone spell trouble for Bombshells, but the bar’s problems don’t end there. The Gulf Freeway location is under a temporary restraining order prohibiting it from serving alcohol for a period of at least two weeks. An appeal of that ruling failed, and the company opted to temporarily shut down the location rather than remain open to serve food without alcoholic beverages. The company blames the prosecutor who obtained the restraining order for putting more than 100 employees at that location out of work.

The Bombshells lawsuits provide a good illustration of the fact that the most obvious responsible party isn’t necessarily the only person or entity liable for injuries. While it’s always important to identify all potentially responsible parties, looking beyond the obvious is particularly important when the person with immediate responsibility for the accident or injury is unable to provide fair compensation, or when a negligent party is also a victim.

In Dram Shop accidents, it is not unusual for a driver to be uninsured, or to lack sufficient insurance to fully compensate the victim. An experienced dram shop accident lawyer can be the best source of information about other options for recovering damages and putting your life back on track.