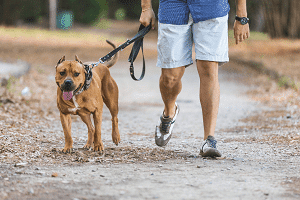 Below are the leash law and dangerous dog law for Friendswood, Texas.

(a) It shall be unlawful for any animal owned, kept or harbored to run at-large.

(b) The director of animal control, the animal control officer, or any peace officer is authorized to impound any animals running at-large.

(c) Dogs traveling in the backs of pickup trucks, open cab vehicles, and trailers, which are not covered with a camper cover, side board, or other such device, shall be considered at-large. Dogs traveling inside vehicles shall be restrained.

(a) Definitions. For the purposes of this article, the definitions of “dangerous animal” and “wild animal” contained in section 10-3 shall be used.

(c) Notification of declaration of a dangerous animal. The director shall notify the owner of an animal of its designation as dangerous and the city’s requirements for owners of dangerous animals as set out in subsection (g) of this section. The notice required herein shall be served as stated in section 10-169

(d) Hearing request. If an animal is declared to be dangerous under this article, the notice shall inform the owner of the animal that a determination hearing may be requested to contest such declaration. The request for a hearing must be in writing and must be received by the director within ten days of the date of service of such declaration. If such request is not received within the ten-day period, the director’s declaration shall become final.

(e) Defense to declaration of dangerous animal. It is a defense to the determination that an animal is dangerous, and to the prosecution of the owner of an animal declared to be dangerous, if:

(1) The victim injured, bitten, or in fear of injury was teasing, tormenting, abusing, or assaulting the animal or has, in the past, teased, tormented, abused, or assaulted the animal;

(2) The person injured, bitten, or fear of injury was committing or attempting to commit a crime;

(3) A domestic animal is injured or killed and was, at the time, teasing, tormenting, abusing, or assaulting the animal;

(4) Such animal was protecting or defending a person within the immediate vicinity of the animal from an unjustified attack or assault;

(5) The animal was injured and responding to pain; or

(6) The animal was protecting its offspring, itself, or its kennel mates.

(1) The owner shall notify the director, as soon as reasonably possible, upon discovery that a dangerous animal is loose, has been stolen, is unconfined in an approved enclosure, has attacked another animal or a person, or has died.

(g) Requirements of dangerous animal owners. Upon final determination that an animal is dangerous, the owner thereof shall:

(1) As soon as is reasonably possible, but not more than 24 hours after such determination, cause such dangerous animal to be placed and kept in a proper enclosure, except as otherwise specifically permitted herein;

(2) Within 60 days of such determination, present to the city a certificate of public liability insurance in the amount of $100,000.00 to cover any damages which may be caused by the animal. The insurance shall be for a 12-month period, shall not be canceled unless the animal is no longer kept by the owner, and shall provide not less than 30 days written notice to the city of any cancellation thereof;

(3) Securely muzzle such dangerous animal when taken outside the enclosure, in a manner that will not cause injury to such animal or interfere with its vision or respiration, but shall prevent it from biting any person or animal. The dangerous animal must be restrained by a substantial chain or cable leash having a minimum tensile strength of 1,000 pounds and shall not exceed six feet in length;

(5) Within 30 days, display, immediately below each sign described in subsection (g)(4) of this section, a symbol warning of the presence of the dangerous animal. The director shall approve the size and design of such symbol;

(6) Within 30 days, cause the dangerous animal to be spayed or neutered; and

(7) Within 30 days, cause the animal to wear, at all times, a fluorescent orange collar or harness of such size and color intensity so as to be visible at a distance of not less than 50 feet, by a person of ordinary vision.

If the owner of an animal declared to be dangerous fails to comply with the ownership requirements listed above within the stated periods, such animal shall be destroyed as provided in section 10-123. Any animal declared to be dangerous shall not be offered for adoption or sale and shall not be removed from its approved enclosure or the city without prior written notification thereof to the city.

(h) Dangerous animal at-large. Any dangerous animal found at large, after the owner thereof has been issued a notice that such animal is dangerous, may be destroyed by any animal control or peace officer, without the officer having to catch or impound such animal or notify its owner.

(i) License revocation of dangerous animal. The director may, after providing the opportunity for and holding the requested hearing, revoke the license for any animal whose owner has been notified that the animal has been conclusively presumed to be dangerous if said animal:

(1) Is not confined or is found running at large;

(2) Is not muzzled as required herein;

(3) Bites or attempts to bite any person or chases or otherwise attempts to catch a person;

(4) Attacks or attempts to attack any other animal in violation of any section or part of this article;

(5) Is owned by a person who has been convicted of a violation of any federal, state, or local law, article, or rule pertaining to the animal;

(6) Is dangerous and its owner fails to maintain insurance coverage in the manner and in the amounts set forth in subsection (g)(2) of this section;

(7) Is dangerous and its owner does not register such animal as required in subsection (f) of this section; or

(8) Is dangerous and its owner does not build, obtain, or provide an enclosure and confine said animal within the enclosure within 30 days of such notification.

(b) The director shall seize the vicious animal or order its seizure and shall provide for the impoundment of the animal in a secure and humane environment until the court orders the disposition of the animal.

(c) The municipal court shall set a time for a hearing to determine if the vicious animal caused the death or serious bodily injury by attacking, biting, or mauling the victim. Such hearing must be held not later than the tenth day after the date on which the warrant is issued. The municipal court shall give written notice of the time and place of the hearing to the owner of the animal or person from whom the dog was seized and the person who made the complaint. Any interested party, including the city prosecutor, the director, an animal control officer, or a peace officer may present evidence at the hearing.

(2) If the court finds that the animal caused serious bodily injury to a victim by attacking, biting, or mauling a victim, the municipal court may order the vicious animal destroyed. If such a finding is not made, the court shall order the animal released to its owner, the person from whom the animal was seized, or any other person authorized to take possession of the animal.

(3) The municipal court may not order the vicious animal destroyed if the court finds that:

a. The animal caused serious bodily injury to a victim and the animal was being used for and was acting in protection of a person or person’s property;

c. The animal was not being used for protection of a person or person’s property;

d. The attack, biting, or mauling occurred during an arrest or other action of a peace officer while the peace officer was using the dog for law enforcement purposes;

e. The animal was defending a person from an assault or person’s property from damage or theft by the injured victim; or

Any animal may be destroyed by an animal control officer or peace officer, in the interest of public safety, when such animal is found attacking, biting, or mauling victims at large.

10-8 Number one person can own limited to four per home, two per apartment.