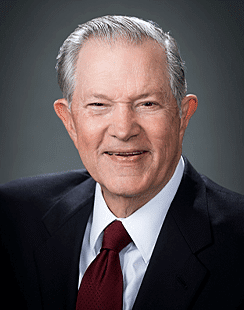 Robert S. Simmons went to be with the Lord on July 22, 2020. But the legacy he built and left behind lives on in the law firm of Simmons and Fletcher, P.C., Injury & Accident Lawyers, and his niece, Sharon Simmons-Cantrell.

Robert lived a life as a follower of Christ, always making clear to those who worked with and around him, that putting God first was of utmost importance to him.

“I do what I say. I do it consistently. I’ve done it all my life. This is the way I was raised. It just seems right. I have a conscience. I’ve got to answer to God. I may be able to fool you, but I can’t fool God.” – Robert S. Simmons

Christian Trial Lawyers was never just a slogan to Bob, but a reminder of whom we are called to represent and must be prepared to answer to at all times. 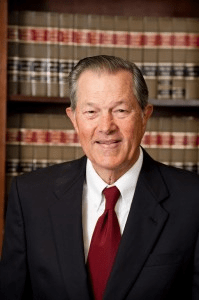 Robert Simmons became a Christian when he was 12, but in his own words, he never understood how God could really become a part of his life until he began really studying His word in 1976. That changed his life.

Robert Simmons, the firm founder, graduated from the University of Houston in 1964 with a Bachelor of Business Administration degree and from the University of Houston Law Center in 1966 with a Doctorate of Juris Prudence degree. After practicing law for about 8 years, he felt led by the Lord to form Brothers’ Brother Attorneys, a professional corporation, which continues today as Simmons and Fletcher, P.C., Injury & Accident Lawyers.

Robert and Marilyn married in 1961 and had four children (a son and three daughters).  As of the date of his passing, he had nine grandchildren. A native Houstonian, during his life he served as a member of the Board of Trustees at the College of Biblical Studies from 1981 until his passing and served as a Deacon and Sunday School teacher at Fairfield Baptist Church in Cypress Texas.