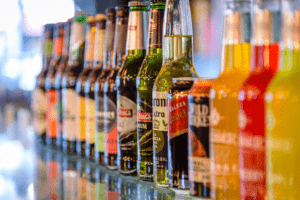 Any business that serves alcohol for onsite consumption is a Dram Shop.

A dram shop lawyer is a personal injury attorney who handles claims against bars that overserves their patrons after they are obviously intoxicated. Simmons and Fletcher, P.C., handles claims against reckless bars.  The sale of alcohol is a billion-dollar industry in the United States. Unfortunately, some bars put profits over safety. There were 1,077 fatalities caused by drunk driving accidents in Texas in 2021. Even though there are dram shop laws prohibiting the sale of alcohol to obviously intoxicated persons, many of those drunks were overserved at a bar before they got on the road and killed someone. If someone you love was injured or killed due to a drunk driver, talk to a Houston dram shop lawyer with our law firm about your rights today by calling 1-800-298-0111 for a free consultation.

When a person is allowed to consume too much alcohol at a bar or other establishment and then goes out and causes a serious auto collision, you may have legal recourse against the establishment that overserved the drunk driver.  You need to speak to a Houston Dram Shop attorney regarding your rights immediately.

What is Dram Shop Liability?

Dram Shop Liability is the legal liability that a bar, restaurant, or other sellers of alcohol have for serving alcohol to a person who has already become obviously intoxicated.  States have enacted statutes to place a higher burden on those who profit off of alcohol sales to take precautions to prevent people from driving while intoxicated.  These laws are known as ‘Dram Shop Acts’ and are named for the ‘Dram’ which is one measure of alcohol.

When Do I Need a Dram Shop Lawyer?

A Dram Shop lawyer may be able to help you anytime there is evidence that:

In order to determine this, generally, you need a blood-alcohol test performed at or near the time of the collision so that the level of intoxication can be used to calculate back how long the person was drunk enough to be considered obviously intoxicated.  A toxicology expert retained by your Dram Shop lawyer can perform these calculations.

Who Can Bring a Dram Shop Claim?

When a bar overserves a patron resulting in a drunk driving accident, any person injured by the drunk driver’s actions has a right to bring a Dram Shop lawsuit against the place that provided the alcohol.  This includes people in other cars, pedestrians, passengers in the intoxicated driver’s car and, even the intoxicated driver in some cases.  If the victim is killed in the accident, his/her spouse, children, and parents have a claim. (In some states other than Texas, the siblings also have a claim.)

When is a Bar or Restaurant Liable for Overserving Alcohol to an Intoxicated Person in Texas?

The injured victim and his/her dram shop lawyer have the burden of proving these facts.

What is the Safe Harbor Defense to Dram Shop Liability?

Businesses that serve alcohol can avoid some responsibility for employees’ actions overserving people under the Dram Shop Act under a provision known as the Safe Harbor Defense.  Under the Safe Harbor Defense, an employer cannot be held liable for the actions of its employee who sells alcohol to an obviously intoxicated person if they:

Who Bears the Burden of Proof on the Safe Harbor Defense?

In a civil liability case, the employer must prove that employees are required to take a two-hour training course on overserving and that the employee actually took the course. The victim and her dram shop attorney bear the burden of proving that the employer directly or indirectly encouraged the sale of alcohol to already intoxicated persons.

Are Managers/Owners Protected by the Safe Harbor Defense?

The Safe Harbor Defense is somewhat unclear as to what happens if the bar or restaurant owner or manager himself serves an obviously intoxicated person. In the case of 20281, Inc. v. Parker, the Texas Supreme Court gave some guidance on this issue. In that case, the Texas Supreme Court opined that vice-principals were the employer and not the employee for purposes of the Texas Dram Shop Act. As a result, the Texas Dram Shop Safe Harbor Defense does not even apply to protect them.  While the Court gave a definition of vice-principal that clearly included persons placed in the management of all or part of another person’s business, it declined to decide whether a pool hall manager was a vice-principal in that case.  However, this is likely because the case had already been decided by another issue, and giving such an opinion would likely be considered an inappropriate advisory opinion. In any event, this case is a strong indicator that management personnel will be held to a higher standard when it comes to overserving obviously intoxicated patrons.

Accidents caused by drunk drivers are some of the worst accidents on the road. When a Dram Shop allows a drunk to take the wheel, he may weave across lanes, drive the wrong way, travel at unsafe speeds, or take any number of unsafe actions he might not otherwise take if sober. Some of the injures we see as a result of these collisions include:

If you have sustained serious injuries, call a Dram Shop lawyer today.

As you can imagine, evidence that proves the management in a bar or restaurant encouraged overserving of alcohol to patrons can be difficult to come by.  The more time that passes, the harder it may be to find this information.  This is why it is important for you to promptly hire an attorney who can take steps to preserve video recordings, credit card receipts, and other evidence before they disappear. Don’t wait another moment. Call Simmons and Fletcher, P.C. today if you or someone you love has been a victim of a drunk driving accident. (713) 932-0777.