A Wernicke-Korsakoff Syndrome lawyer can help if your doctor fails to diagnose a vitamin B1 deficiency leading to you developing Wernicke’s Encephalopathy. According to an article published by the National Institute of Health, “It is estimated that merely 20% of cases are diagnosed properly, whereas the majority are misdiagnosed.” Speak to a Wernicke-Korsakoff Syndrome lawyer if you suspect you or your loved one was diagnosed with this condition as a result of medical malpractice. Call 1-800-298-0111.

WKS Developing After a Surgery or Hospital Stay

Wernicke-Korsakoff Syndrome a/k/a Wernicke’s Encephalopathy is a serious disease caused by vitamin B1 (thiamine) deficiency that often involves significant and permanent brain damage.  This condition commonly develops after a patient undergoes gastric bypass surgery or any other procedure or medical condition in which a patient is deprived of vitamin b1 and the doctor and/or a subsequent emergency room doctor fails to recognize the signs and symptoms of Wernicke’s Encephalopathy until it is too late to reverse the process. If you have been a victim of misdiagnosis of vitamin B1 deficiency, speak to a Wernicke-Korsakoff lawyer today.

What is Wernicke-Korsakoff Syndrome?

Wernicke-Korsakoff Syndrome is a neurological condition that is a direct result of a vitamin B1 deficiency in the body. Wernicke Korsakoff Syndrome is also known as Wernicke’s Disease, Korsakoff’s Psychosis, Wernicke’s-Encephalopathy, or Wernicke-Korsokoff Syndrome. It is a disease characterized by confusion, amnesia, impaired short-term memory, confabulation, muscle weakness, paralysis of eye muscles, tremor-like eye movement, and in later stages, coma.

How Can Medical Malpractice Cause Wernicke-Korsakoff Syndrome?

Doctors have a duty of care to patients. There are certain scenarios in which Wernicke-Korsakoff Syndrome is likely to occur, especially when the patient also has a vitamin B1 deficiency. When doctors misdiagnose patients that have a thiamine deficiency or fail to test patients undergoing bariatric surgery or that have extended incidents of vomiting in their medical records, they may be found negligent. Doctors should know to look out for symptoms and combinations of risk factors for Wernicke-Korsakoff Syndrome including:

Whether it be a pregnant woman with severe morning sickness, a bulimic person, or an otherwise ill patient, anyone experiencing a prolonged period of nausea and/or vomiting is at risk for not receiving sufficient Thiamine in their diet to replace what is being burned and expelled. Thus, anyone with a history of nausea and vomiting should raise a red flag for being at risk. 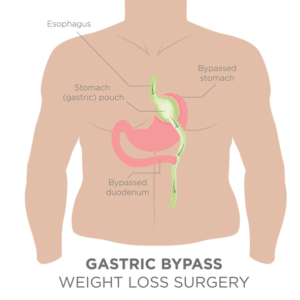 Bariatric Surgery is also known as Gastric Bypass Surgery and Laparoscopic Surgery. It is a procedure in which the stomach is surgically divided into two separate compartments and one the larger one is essentially disconnected to reduce the amount of food intake. That part of the stomach and some of the intestines, particularly the duodenum, are bypassed so that less food absorption occurs in the digestive process. This poses a thiamine deficiency risk in two ways:

With thiamine intake being reduced in two ways, the risk of Wernicke-Korsakoff Syndrome rises substantially. Some medical providers suggest longer monitoring and regulation of the B1 levels following all weight loss surgery for this reason.

When someone is hospitalized for an extended period of time such that they receive their nourishment primarily or exclusively through an IV, they may receive as little as 1/6th of their normal recommended daily thiamine intake. Lack of appropriate vitamin supplementation can lead to a deficiency in Vitamin B1 and ultimately, Wernicke-Korsakoff Syndrome.  When you are in a hospital for an extended period of time and subject to feeding via IV, it is absolutely critical that your doctor monitor your food intake and blood vitamin levels to ensure you are receiving essential nutrients. Failure to do this can result in permanent and severe consequences.

Any surgery can result in thiamine deficiency if proper vitamins are not administered when required. Any patient that appears to have undernourishment, dehydration, and post-surgical nausea and vomiting should be evaluated and treated for a vitamin B1 deficiency.

Alcoholism and liver disorders can result in a vitamin B1 deficiency leading to Wernicke-Korsakoff Syndrome. While this is a cause of the condition, WKS as a result of alcoholism is not a medical negligence situation. Excessive use of alcohol can disrupt the natural intake of thiamine in the liver and gastrointestinal tract. Anyone with a history of alcohol that presents to the hospital with symptoms of Wernicke’s Encephalopathy and/or Wernicke-Korsakoff Syndrome should be evaluated and treated for B1 deficiency without delay.  Causation is extremely difficult to pinpoint in these situations due to the voluntary overuse of alcohol. Thus, cases involving alcohol-induced WKS do not meet our criteria.

How Can Bariatric Surgery Cause Wernicke’s Encephalopathy? 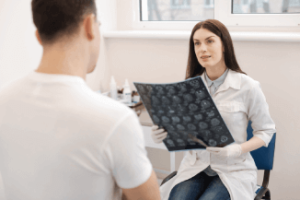 Early diagnosis of Vitamin B-1 deficiency is critical.

Certain medical procedures (bariatric surgery) and conditions will result in a person being deprived of required nutrients including vitamin B1. When your body lacks b1 for sufficient time, it can result in permanent irreversible brain damage resulting in Wernicke-Korsakoff Syndrome. When a patient presents to a doctor complaining of neurological symptoms related to Wernicke-Korsakoff Disease, a detailed history of the patient should trigger the doctor to explore the possibility of vitamin B1 (thiamine) deficiency.

What Damages Can a Wernicke-Korsakoff Lawyer Seek?

The damages that you may recover vary to some degree by the state in which the negligence occurs. However, in general, you are entitled to seek damages for the following:

Speak to a Wernicke-Korsakoff attorney regarding the specific facts of your case to learn more.

When it comes to Korsakoff disease, early diagnosis is a must! A Wernicke-Korsakoff misdiagnosis can be fatal. Anytime a patient arrives at an emergency room with more than one symptom of Wernicke-Korsakoff Syndrome, the patient should be immediately evaluated and treated for vitamin B1 deficiency because it is a medical emergency. Furthermore, a doctor may be negligent for failure to diagnose and treat a patient when he arrives at the hospital with any of the above origins in his history and a single symptom of  Wernicke’s Encephalopathy.

If you or a loved one were delayed in getting vitamin B1 treatment due to a doctor’s failure to timely diagnose and provide treatment, call Simmons and Fletcher, P.C. for a free consultation today at (713) 932-0777.

Review: 5/5 ★ ★ ★ ★ ★ ” I had a great experience with Simmons and Fletcher. Sharon Simmons Cantrell did an exceptional job on my case. She was attentive and sweet and fought hard for me. I would recommend her and the entire firm to anyone. Thank you for all you did for me!”-Sandra W., actual client.

Below are some of the most common questions asked about Wernicke-Korsakoff and related conditions.

It has one cause—thiamine deficiency. If left untreated it can lead to permanent damage, coma, and even death.

What is Korsakoff Syndrome?

Peripheral Neuropathy has also been reported as prevalent.

Are There Any Other Causes of Wernicke’s Disease and Wernicke-Korsakoff Syndrome?

The only cause of this condition is vitamin B1 (thiamine) deficiency. The human body cannot produce B1. However, we require B1 for many essential functions and processes such as glucose breakdown, the breakdown of carbohydrates to produce energy, glutaric acid production, metabolize lipids, produce myelin, and taurine production.

Can Wernicke’s Encephalopathy and Wernicke’s-Korsakoff Syndrome Be Prevented?

Yes. If the vitamin deficiency is caught early, the condition can be easily treated by supplementing vitamin B1 by both injection and change of diet/nourishment intake. Once the person develops Wernicke-Korsakoff Syndrome, the condition is irreversible.

What is Thiamine (Vitamin B1) and Why is it Important? 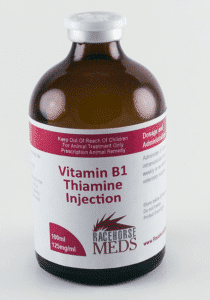 Thiamine is also known as vitamin B1 and thiamin. It is found in many foods, can be acquired in pill form as a dietary supplement, and can be given by a physician in the form of a B1 injection. The human body requires thiamine for many essential functions and processes such as glucose breakdown, the breakdown of carbohydrates to produce energy, glutaric acid production, metabolize lipids, produce myelin, and taurine production.

What Are the Symptoms of Thiamine Deficiency?

When someone suffers from Vitamin B1 deficiency, there are several symptoms that may develop. Some of these include:

How is Thiamine (B1) Deficiency Diagnosed?

Clinical diagnosis of thiamine deficiency is made by a finding of two or more of the following symptoms:

Identification of two or more of the above should prompt a doctor to run a simple blood test to determine if thiamine levels are low. If a blood test is not available for any reason, vitamin B1 has a very low risk of serious side effects when used as prescribed and can be crucial in preventing irreparable brain damage.

What Should You Do if You Suspect a Vitamin B1 Deficiency?

If you suspect that you may be suffering from a vitamin B1 deficiency, seek medical care immediately. Express your concern to a qualified physician. If the condition is caught early enough, a Vitamin B1 shot can cure the condition. Failure to catch and treat this condition can result in permanent catastrophic injury.  If you suspect you have signs of Wernicke Korsakoff Syndrome or Wernicke Encephalopathy, seek emergency medical care immediately. If you suffer from this condition as a result of a failure of a doctor to diagnose this condition, call Simmons and Fletcher, P.C. for a free consultation.

Is There Treatment for Wernicke-Korsokoff Syndrome and Wernicke’s Encephalopathy?

If the thiamine deficiency is caught soon enough, a B1 injection can reverse all early-onset symptoms. However, if it goes untreated for too long the symptoms can become permanent. Balancing the patient’s vitamin B1 can prevent further damage or death, but the patient will likely require a long-term life care plan. Persons suffering from Wernicke-Korsokoff Syndrome or Wernicke’s Encephalopathy should consult a qualified medical professional to explore treatment options.

What is the Wernickes Area?

The Wernicke’s area is used to describe a portion of the temporal lobe that is responsible for language development. The American Academy of Neurology published an article that states ‘the Wernicke area has come to be synonymous with the left posterior superior temporal gyrus (PSTG) and supramarginal gyrus (SMG), i.e., the cortices that surround the left posterior Sylvian fissure.’

What is Wernicke’s (Receptive) Aphasia?

Wernicke’s Aphasia is a condition in which the affected individual is capable of speaking words fluently but without meaningful content. This form of aphasia impairs the individual’s ability to understand the meaning of spoken words and sentences; which is why Wernicke’s aphasia is also referred to as ‘fluent aphasia’ or ‘receptive aphasia’.

Aphasia is usually the result of a traumatic brain injury or developed illness. Depending on the severity and extent of damage to the Wernicke area, one may become unable to understand even the simplest spoken or written information. Symptoms related to Wernicke’s Aphasia include:

Individuals with Wernicke’s Aphasia usually do not recognize their impairment or fail to comprehend what they are saying is not what they mean to say. These individuals have significant trouble understanding what others are saying; however, they can often understand social cues, such as smiling and nodding. Below are a few strategies one can use to better communicate with an individual affected by Wernicke’s Aphasia:

These are just a few ways you can help someone with Wernicke’s Aphasia communicate successfully. Always remember to be patient, as it is more frustrating for the affected individual to deal with than you.

This information page is for educational purposes only and should not be considered a substitute for advice from a qualified medical professional.