Table of Contents show
1 AFFF Firefighter Foam Lawsuits Mounting
2 AFFF Lawsuits Update
3 What is AFFF?
4 What are PFAs?
5 What Cancers are Caused by the PFA’s in AFFF?
6 Do I Have a Firefighter Foam Cancer Claim?
7 Evidence 3M and Others Knew of the Danger
8 Why the Focus on Firefighters in PFA Cases?
9 Talk to an AFFF Cancer Lawyer 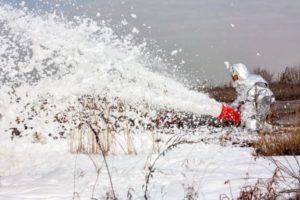 Firefighter foam cancer lawyers have filed thousands of AFFF cancer lawsuits across the country on behalf of firefighters and servicemen who developed cancer as well as state and municipal governments who have spent millions in taxpayer dollars on land and water clean-up to remove toxic “forever chemicals” known as PFAs.  with more AFFF cancer lawsuits being filed each day.  The cases have been ordered consolidated into a multi-district litigation (MDL) pending in the U.S. Federal District Court of South Carolina and are expected to grow exponentially. So far, 3399 have been transferred. If you were exposed to PFAs via the regular use of AFFF while working as a firefighter and/or working with the foam on military bases, you may be entitled to compensation. Call 1-00-298-0111 to be connected with a firefighter foam cancer lawyer to see if you qualify today.

The first bellwether trial has been set for June 5, 2023, in the case of City of Stuart, Florida v. The 3M Company et. al. Three motions for summary judgment filed by some of the defendants are currently awaiting a ruling. This case is different than the firefighter foam litigation but is still a part of the MDL. Essentially, there are two separate types of cases: governmental units suing over PFA pollutants in their water supply and firefighters exposed directly to the foam. The City of Stuart case is the former. Firefighter bellwether trials are anticipated to follow and a mediator has already been appointed to plan settlement discussions. Thus, if you  are a firefighter diagnosed with cancer after using AFFFs, now is the time to file your AFFF lawsuit and join the MDL.

AFFF is an acronym for aqueous film-forming foam. AFFF is a foam designed to extinguish jet fuel- and petroleum-based fires. It has been around for decades. AFFF is dangerous to humans because it contains various PFAs.

PFAs are a grouping of over 9000 different synthetic chemicals used in hundreds of products. PFAs are dubbed forever chemicals because when they are spilled, placed, or dumped in the environment, they do not break down naturally ever and they will accumulate for years in the bloodstream. It is believed that more than 95% of the U.S. population has PFAs inside them. They have been in use for over 70 years and can be found in such household products as microwave popcorn packages, Teflon, and Scotchgard. PFAs are a common component used in AFFF firefighter foam.

What Cancers are Caused by the PFA’s in AFFF?

A number of cancers are still being investigated for a possible link to PFA’s found in the firefighter foam.  Some of these include:

Do I Have a Firefighter Foam Cancer Claim?

Anyone making a cancer claim will need to be able to establish a qualifying cancer diagnosis as well as proof of prolonged exposure to AFFF foam. Exposure through regular use at your job such as firefighters, military servicemen exposed on board ships and/or at bases, or persons working in the PFA factories. The timing of your exposure, length of exposure, and timing of your cancer diagnosis may also play a role in which cases are accepted. This may vary depending upon which state your exposure took place in.  Other law firms’ criteria may differ from ours regarding which cancer cases and locations they accept.

Evidence 3M and Others Knew of the Danger

Various studies and reports going back to the 1970s suggest that manufacturers of AFFFs were aware of the potential dangers posed by PFAs. Tests done in the 1970s found that PFAs build up in the bloodstream over time for workers on the PFA plants and do not go away. Studies in the 1980s suggested that PFAs could cause cancer in lab rats. By 1990, increased cancer risks for humans exposed were becoming apparent.  Ongoing studies of recent times suggest that we are just at the surface of learning what cancers can be linked to PFA exposure and to what degree.

In 2006, the U.S. Environmental Protection Agency launched a program to reduce PFAS emissions and product content by 95% by 2010 and 100% by 2015 due to the hazardous nature. Despite this, companies such as 3M and Dupont have continued to make them.

Why the Focus on Firefighters in PFA Cases?

Firefighters are considered to be at high risk for developing cancer from the use of PFAs because of the regular exposure to AFFF foam that is used for combating chemical fires and oil-based fires. Firefighters are often covered from head to toe in the foam after fighting an industrial plant explosion or airplane crash. According to the International Association of Fire Fighters (IAFF), cancer was the cause of death for 66% of career firefighter line-of-duty deaths between 2002 and 2019. A Firefighter’s risk of being diagnosed with cancer is 9% higher than the general U.S. population and they have a 14 percent higher risk of dying from cancer than the general U.S. population.

Talk to an AFFF Cancer Lawyer

If you or a loved one has developed one of the above cancers after prolonged exposure to firefighter foam through their work, talk to an AFFF cancer attorney to see if your case qualifies for the developing AFFF MDL. The first bellwether trial is currently set for June 2023. It involves a water contamination case brought by the City of Stuart, Florida vs 3M Company and other manufacturers. The court is expected to set deadlines to join the MDL in the near future that could bar your claim.  Talk to a lawyer about your AFFF cancer lawsuit to protect your rights. These cases are worked on as co-counsel with other law firms.