How to Declare a Dog a Dangerous Dog In Houston

You just bought your new home. It seemed like a quiet, safe neighborhood in the suburbs of Houston. But then, “those neighbors” moved in.

You know the ones. Every time a jogger goes by, you hear their large dogs slam into the fence snarling and barking.  The ones who always say something like: “Kujo just wants to play,” after Kujo gets out and terrorizes the neighborhood kids on their bikes. The ones who said getting bit was the really the neighbor’s fault for running when Kujo got out and ran into their garage growling and gritting teeth.  “They made Kujo think they were playing chase.”

You can declare a dangerous dog in Houston.

Title 10 of the Texas Health and Safety Code section 822 deals with “dangerous dogs.”  Under that chapter, a Dangerous Dog is defined as a dog that either:

The second prong above is very important. Notice that the dog does not have to bite to be declared dangerous. It only has to “commit unprovoked acts” outside of its enclosure that causes a person to believe it will attack and cause harm.  In other words, if the dog is outside of its home/fence, and it lunges, snarls growls, or in any way threatens someone to the point that a reasonable person would believe the dog would attack, it can be declared a dangerous dog. The dog could even be on a leash with the owner when this happens.

Most municipalities in Texas have adopted their own version of the Texas Dangerous Dog Law that may have a few more restricting twists. Most have also adopted a procedure by which you can initiate the proceedings to have a dog declared dangerous.  In Houston, this procedure can be found in the Code of Ordinances, Chapter 6. 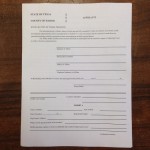 You start by filing a sworn statement or affidavit with the Bureau of Animal Regulation and Care (BARC).  For all practical purposes, BARC is Houston Animal Control*. The photo on the right is a downloadable form affidavit to initiate proceedings to declare a dog a dangerous dog. Once the affidavit is completed, you can mail it in to:

Upon receipt of a sworn affidavit, a Houston Animal Control Manager must review the affidavit to determine if the complaint meets the state definition of a dangerous dog. Thus, it is important that you track the language of the statute in your affidavit as much as possible.  You want to describe facts showing that it happened outside the dog’s enclosure and describing facts that show that the dog either attacked someone or acted aggressively towards someone giving them a reasonable belief the dog is dangerous and would attack if given the opportunity.

At the hearing, a Hearing Officer hears the case and decides whether the dog should be declared dangerous or not. You may be called to testify as a witness. If so, you should dress well, arrive on time, and cooperate with the Court in giving your testimony.

If the Hearing Officer decided that the dog is a dangerous dog and has attacked a person causing serious injury or death, he may order the dog to be put down.  If the dog is determined dangerous but not ordered euthanized, the owners will be ordered to comply with the conditions of the Health and Safety Code for ownership of a dangerous dog.  Those conditions include:

If the dog is found not to be dangerous, it will be returned to the owners.  The owner is given 30 days to comply with the order of the Hearings Officer or the dog may be euthanized.

Proving the knowledge of the dog’s owner can be difficult without the dog having already been declared dangerous.  It is important that you hire a knowledgeable dog bite lawyer to investigate the case and determine whether evidence of the dog’s vicious nature existed and whether the dog’s owner knew or should have seen the warning signs.