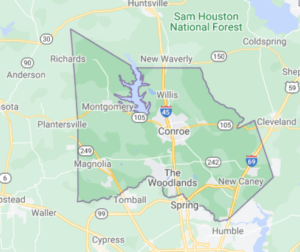 What is the Phone Number for Montgomery County Animal Control?

Which Cities in Montgomery County Have Their Own Animal Control?

There are three cities that lie at least in part in Montgomery County but maintain their own animal control services. These cities include Houston, Conroe, and Willis.  If you are in those cities, you can report animal attacks during weekday business hours as follows:

Simmons and Fletcher, P.C. is a Houston-based law firm that has helped Texans recover from unwarranted, unprovoked dog bites since 1979. If you have been injured due to someone else’s dog attacking you or your children, call us for a free consultation. If you hire one of our attorneys as your dog bite lawyer, we work on a contingency fee basis. That means we pay the expenses of investigating and prosecuting the claim and you pay us NOTHING unless we make a recovery for you. Call now at (713) 932-0777.