Slip and falls at Walmart are not uncommon occurrences. Due to its size and the relative frequency of  Walmart slip and fall claims, Walmart has devised a strategy for fighting these types of claims to try to avoid liability. You, the consumer are at a distinct disadvantage from day one if you try to fight this giant on your own. If you are injured in a slip and fall at Walmart, you should talk to a Walmart slip and fall accident lawyer about your rights at (713) 932-0777.

At the heart of the defense lies a company set up just to handle their claims called Claims Management, Inc.  This company has one job–to manage claims made against Walmart and try to reduce liability exposure.  The defending of the claims starts before you ever even slip and fall.

What Are the Elements of a Walmart Slip and Fall Claim? 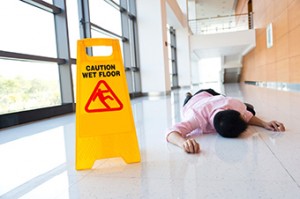 Just because you fall on someone’s property does not mean they are liable for your injuries. To win a Walmart slip and fall claim, you must prove:

You, the injured victim must bear the burden of proving each of these elements of damages beyond a preponderance of the evidence in Texas. This is why when you are injured at Walmart, a slip and fall accident lawyer is important to hire.

The main isles running around the store in a square shape are known as “action alleys.”  Walmart assigns the job of pushing a broom up and down every aisle in set intervals (generally 15 minutes) to a certain designated Walmart associate. That way, when someone slips and falls, they can say “well associate so-and-so pushed a broom down that isle within 15 minutes prior to the fall and saw nothing, thus the spill could not have been there long enough that we should have known or discovered it upon reasonable inspection.”  Poor so-and-so may or may not have actually done his job that day, but if he wants to keep his job, you can bet he will testify that he did it. This can make it difficult to prove they had the required knowledge to establish liability in your Walmart slip and fall claim.

Video Cameras in the Store – Second Phase of the Defense

Walmart has surveillance videos located in the most traveled areas of the store. These videos will usually capture footage of any fall.  The problem with these videos is that the floor is a solid glossy white and the video is not high quality. This often makes it extremely hard to see the substance the person slips on in the video.  Second, if the video does help you, they can always recycle it if you are not on your toes and have a spoliation of evidence letter sent to them immediately to preserve the tape. More importantly, if you do not ask for the time period leading up to the fall, they may save the clip starting only at the fall, thereby destroying the only evidence of where the spill came from and how long it was there. You need to hire an experienced Walmart slip and fall lawyer immediately to make sure the evidence in your case is preserved. Company policies often call for the recycling of tapes in 30 days in supermarkets.

Throwing Up Legal Hurdles – Third Phase of the Defense

Claims Management, Inc. handles the investigation and defense of personal injury claims for all Walmart stores. They have law firms at their fingertips who handle almost nothing but Walmart slip and fall accident cases exclusively.  Because Walmart is incorporated in Delaware, they are able to take advantage of an old loophole in the Federal Law known as the Diversity Jurisdiction Rule.  Under 28 U.S. Code Sec. 1332, if you file a lawsuit in State Court for damages exceeding $75,000.00 against a company whose principal office is located out-of-state, then they can remove the case to Federal Court under Federal Diversity Jurisdiction. Federal Court is much more expensive to prosecute a claim in and it generally takes longer to bring the case to trial.  Thus, making fewer lawyers want to take the risk and fund the claim.

What Does it Cost to Hire a Lawyer?

Hiring a lawyer after you slip and fall at Walmart can be done on a contingency fee basis. This means you do not pay the lawyer anything upfront, and you pay nothing unless the lawyer makes a recovery for you.

At Simmons and Fletcher, P.C., our slip and fall lawyers have handled numerous cases against Walmart with success. Don’t try to go it alone no matter how nice they may seem. It is an adjuster’s job to lead you on and lull you into a false sense of security so that time passes and you miss the opportunity to preserve valuable evidence that is crucial to proving your case. Don’t wait another moment. If you have been injured in a slip and fall accident at Walmart, call us for a free consultation today!