What is Modified Comparative Negligence?

If you’ve spent any time around children (or were once one yourself) you know that kids often excuse bad behavior by blaming the actions of another party.

Not unlike schoolyard disputes, when a personal injury suit is filed, both parties attempt to explain that the injury was, at least to some extent, the fault of the other party. How much fault each party bears directly influences the amount of damages – such as medical expenses, loss of wages, and property damage – that the plaintiff can receive in the lawsuit.

“Fault” in the legal sense is determined by a negligence standard. “Negligence” is the failure to act as a reasonable ordinary person would have acted under the same or similar circumstances. If that failure contributes (expressed in percentages) to the cause of the injury, there is some “fault.” 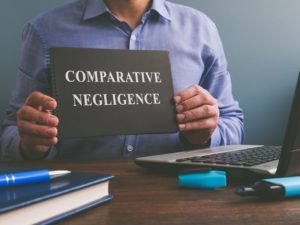 There are 3 types of negligence used in personal injury cases:

Ways to Prove Fault in a Personal Injury Case

It’s also a good idea to ask a trial attorney to see whether your damages can be recovered under your own auto insurance policy, even if you are partially at fault. Some auto policies, for instance, have Personal Injury Protection (PIP) that covers a party up to a maximum amount.