Are Pre-injury Releases and Indemnity Agreements for Children Valid?

The kid’s activity businesses are the hottest trend of the 2000s.  Things like Bouncy-rooms, Gymnastics, Laser Tag, Go-Karts, Karate, Kick-boxing all cater to making your child’s birthday party big and memorable.  Whether your child is joining one as an ongoing activity or attending a one-time birthday party, all these places seem to have one thing in common. They require the parent and/or child to sign some sort of waiver/release of liability if the child gets injured. But, are the documents you sign really valid?

Can a Child Enter Into A Release?

A Release is a type of contract to give up a right to sue. As a general rule of long-standing law, a child under the age of 18 cannot legally enter into a contract. Thus, any contract entered into a minor, including a release, is voidable.

Can Parent Waive a Child’s Rights in Texas? 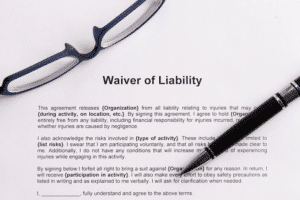 No. In the 1990s, the Texas Supreme Court looked at the issue of whether or not the parent could enter into such a contract on the child’s behalf. They held that a release of liability pre-injury, signed by a parent of the injured child was void.  The logic behind this decision was that it was a matter of Texas public policy to protect children–even from their own parent’s actions. Thus, any contract attempting to give up the child’s right to bring a claim against someone for their future, yet unseen, negligence is void.

Despite the above, releases are still required by all of these facilities. Why?  The answer is in the language–they are not just releases, they are indemnity agreements.

What is the Difference Between a Release and an Indemnity Agreement?

A release and an indemnity agreement differ slightly in language, but drastically in legal meaning. A release is an agreement to give up a person’s future rights now.  An indemnity agreement, however, is an agreement by the signor (parent) agreeing to hold the indemnitee harmless or free of responsibility from future claims.  The latter is in effect an insurance agreement that does not relinquish the future right but promises to assume the debt it creates.

The Houston Court of Appeals has held that a parent cannot release a minor’s claims for injury caused by another’s negligence in advance by signing a pre-injury release of liability. (See Munoz v II Jazz, Inc., Tex.App.-Houston [14th Dist.] 1993, no writ) However, no Texas court has issued an opinion addressing the validity of Indemnification Agreements. Since these agreements are between an adult and a company, for one to effectively insure the other, one could see how a Texas Supreme Court might hold these enforceable.

On the flip side, one can also argue that indemnity agreements should not be enforced because they create an inherent conflict of interest between the parent and child and have a chilling effect on parents pursuing the child’s rights. Public policy is to protect children and allowing the parents to be deterred from enforcing their kid’s rights does not fulfill this purpose. Indeed, some other state supreme courts such as Colorado and Utah have voided these agreements on these grounds. What this means from a legal practice standpoint is that a personal injury attorney handling such a case has to anticipate the issue will be appealed potentially all the way to the Texas Supreme Court.

What is the Effect of a Release and Indemnity Agreement Signed by Only One Parent in Texas?

For example, Assume Junior is invited to a birthday party at a Houston laser tag facility. Mom, without consulting a lawyer, signs a release and indemnity agreement so junior can play laser tag. Junior then gets injured.   The agreement is void as to the child but potentially enforceable as to the mom. Dad did not sign. So Dad files a lawsuit on behalf of Junior. The release is void as to Junior but and no legal effect on Dad because he never agreed to it.

Dad can sue as a representative of Junior and take a judgment on Junior’s behalf. However, because Mom signed an indemnity agreement, the laser tag company can now sue Mom to recover all damages they incur (the judgment, legal fees, expenses, etc) as a result of the lawsuit filed by Dad for Junior. They will probably bring her into Junior’s lawsuit on a third-party action. Thus, even though it is void against public policy for the child’s rights to be released in advance, the practical effect of the law is to make it where the child’s parent loses more than the child gains. Of course, since the parents are the legal representatives of the child,  they aren’t likely to bring the claim for the child since it will damage them more than it benefits the child. (Unless they are divorced at the time, then anything goes.)

If you have other questions about signing a pre-injury release and indemnity agreement, talk to a personal injury lawyer in Houston, Tx to learn your rights before you sign.