What Is a Black Box?

A black box is a device in an 18-wheeler that documents information about a particular commercial motor vehicle’s movement over time. It can now refer to two different types of devices–an electronic logging device (ELD) or an event data recorder. Both types are useful in determining things such as the route, time of travel, length of trip, speeds, hours of service, breaking time, and other information that may be important to an 18 wheeler accident case.

What is an Electronic Logging Device?

An electronic logging device (ELD) is a tool that connects to the engine of a commercial motor vehicle and tracks driving hours for purposes of establishing compliance with federally mandated Records of Duty Status and Hours of Service.  ELD’s automatically record the date, time, location, engine hours, vehicle miles, and identifying info for the driver and carrier anytime there is a change of duty status or change to a special driving category as defined by federal law. ELD’s also record driving information hourly when the vehicle is in use.  They may be dedicated units or “bring your own device” ELD’s—which means they connect to a cell phone, tablet, or another device for transmitting data.

In December of 2015, The Federal Motor Carrier Safety Association passed a rule mandating trucks no older than the year 2000 to implement electronic logging devices or “ELDs” for their Hours-of-Service tracking system.  There is a staggered period that was set for compliance with some vehicles having to meet compliance by December of 2017 and others by 2019. Implementation of the ELD may or may not replace the use of an event data recorder.

What is an Event Data Recorder?

An event data recorder is a device that is found in many modern 18 wheelers and other commercial trucks. These devices come in different makes and models and may record a multitude of information including the times the truck was in operation and out of service when it started and stopped, the truck’s minimum and maximum speeds at certain times, arrival and departure times from various destinations, when cruise control was on or off, whether and when brakes were applied before and during a crash, speed when the hard brake occurred and more. Modern event data recorders are generally set to store data from critical events such as a crash for a few minutes before and at least 30 seconds after. These black boxes can be critical to establishing exactly when a truck driver perceived an emergency situation and when and how he reacted to it.

Why Are Event Data Recorders and Electronic Logging Devices Important?

Event data recorders and electronic logging devices come in a variety of brands and styles. Each style has its own type of data it stores. Some are designed primarily to determine what happened in an accident or ‘critical event,’ whereas others are designed to allow for the monitoring of truck drivers driving habits via satellite. Some allow the trucking company to print out a full report showing where a truck driver was at any given moment. By comparing this information to driving logs, a truck accident attorney can determine if hours of service rules and speed limits were followed in the hours leading up to the wreck.

Driver fatigue is a huge problem among truck drivers because companies often pay them per load. This means that the more they drive and haul loads, the more they make. Sleeping and resting do not pay. This type of data is invaluable to a truck accident lawyer in establishing why a driver fell asleep at the wheel and that the company’s policies are the real reason it occurred.

There are several companies that make “black boxes” for use in tracking 18 wheelers. Qualcomm, Teletracs, and Omnitracs are three examples of makers of black boxes. They design GPS-driven data collection recorders for the trucking industry to enable them to monitor their fleet, regulate driving, and coordinate load pick-up. Some of these systems even allow the trucking companies to control the temperature in temperature-controlled trucks.

What Are Black Boxes Used For?

The underlying purpose of a black box is to enable a trucking company to be aware of what their drivers are doing and where they are at any given moment. They make conducting business more efficient for over-the-road haulers.

How Does a Truck Accident Lawyer Obtain the Black Box Data? 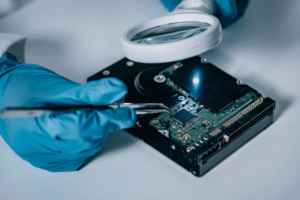 A truck accident lawyer can preserve a black box by promptly sending a preservation-of-evidence letter to the trucking company in possession of the box and then filing a lawsuit in order to request and obtain permission to perform a download of the information in the box.

A preservation-of-evidence letter a/k/a  spoliation-of-evidence letter is a letter that advises the trucking company that the accident is likely to be the subject of litigation and that there is important evidence that needs to be preserved by law on the black box. Upon receiving this notice, the trucking company is now on notice of the importance of the evidence and they have a duty to maintain it. Failure to do so after being put on notice subjects them to penalties and sanctions in a civil action.

Once the duty to preserve the evidence exists, the next step is to file a lawsuit and send out written requests for production. Requests for production are a litigation tool by which one side requests the other side turn over certain relevant evidence. If they fail to do so, the requesting side may seek a court order via a motion to compel discovery.

Obtaining the raw data, however, is not the end. The raw data is often produced in a hard-to-understand form. It is important that your 18 wheeler accident attorney have expert witnesses available for hire to review the data and interpret anything peculiar about the specific “black box” data you have in question.

Talk to Our Lawyers

At Simmons and Fetcher, P.C.  our truck accident lawyers have acquired black box data in many cases over the years and used it to determine that drivers were speeding and/or violating operation safety rules which contributed to a collision. If you would like a free no-obligation case evaluation, please give us a call