Who is Liable for a Texas Road Construction Zone Accident?

There is a saying in Texas: “The shortest distance between two points is under construction.”  This saying is very true from the constant expansion of the I-34 and I-75 corridors running from central Texas to Dallas to the never-ending I-45 South construction running from Houston to Galveston.  Often the construction causes lanes to be diverted and debris to be left lying around.  This article will address who is potentially liable when an accident occurs in a road construction zone.

Table of Contents show
1 Traffic Rules Still Apply
2 Who is Liable for an Unmarked Construction Zone Accident?
3 What is a Traffic Control Plan?
4 Determining Where Things Went Wrong
5 Talk to a Personal Injury Attorney 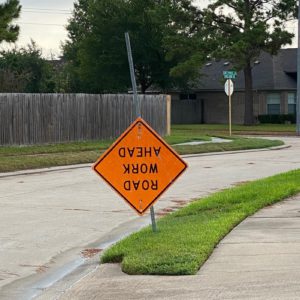 First off, keep in mind that traffic rules still apply. Drivers are especially cautioned to keep a proper lookout for both pedestrians and other motorists in construction areas. Temporary signs changing the speed limit or requiring stops are enforceable. If you or another driver cause the accident by ignoring the traffic signs that are put up, then the offending party is responsible.

Who is Liable for an Unmarked Construction Zone Accident?

What is a Traffic Control Plan?

A traffic control plan is a schematic that lays out how the company intends to ensure the safe flow of traffic and workers through, in, and around the construction zone while the job is underway.  These plans typically have diagrams and detailed descriptions of where the roadway will be altered to the traffic and how motorists will be warned. The contractor awarded the job understands that they must provide the state agency with a traffic control plan.

Talk to a Personal Injury Attorney

In 2001, the Texas Department of Transportation (TXDOT) reported that 244 people were killed in construction zone accidents. If you have been seriously injured in a car accident in a confusing construction zone, it is important that you talk to an attorney about whether there may be a case against persons other than just other motorists who may or may not have sufficient insurance.  Simmons and Fletcher, P.C., Injury & Accident Lawyers offer free consultations on car accident cases involving injuries.  Call 1-800-298-0111 to learn more.