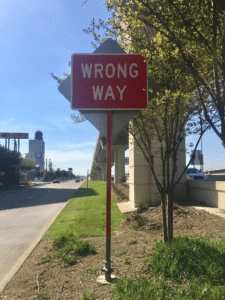 Talk to a lawyer who handles wrong-way driving accidents if you have been injured or lost a loved one due to someone else driving the wrong way on the road. Wrong-way accidents often result in some of the most severe injuries and the highest percentages of traffic fatalities of any type of auto collision. If you have been involved in one, call Simmons and Fletcher, P.C. today for a free consultation at 1-800-298-0111.

What is a Wrong-Way Driving Accident?

A wrong-way driving accident is a collision between two vehicles in which one of the two vehicles is traveling against the legal flow of traffic. On a more colloquial level, it tends to refer to collisions where a car is driving the wrong way on a one-way road such as a tollway. The resulting collision is a head-on accident.

According to the Federal Highway and Safety Administration, 300-400 people are killed every year by wrong-way driving accidents. The states of Texas, California, and Florida have the highest number of wrong-way driving crashes. Texas represents the most in the nation at roughly 14% of all wrong-way driving fatalities. This is not a statistic Texans should be proud of, however, being the largest state in the nation does make sense of the numbers.

What are the Causes of Wrong-Way Driving Collisions? 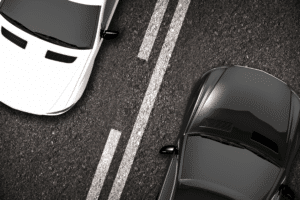 It is easy for cars to drift across the center line when the driver is inattentive, drowsy, or under the influence of intoxicants.

Some of the common causes of  wrong-way accidents happen are as follows:

One common thread among these claims, it is almost always due at least in part to the driver’s negligence when a car is driving the wrong way on the road. Even when signs are down or traffic patterns are confusing, keeping a proper lookout can prevent wrong-way driving accidents.

When is a Texas Driver Permitted to Drive on the Wrong Side of the Road?

Under Texas law, a person may drive on the wrong side of the road in limited circumstances, including emergencies, and in order to pass on a single lane roadway that has a dotted center line for passing. However, the driver is only permitted to cross that center dotted line if there is sufficient distance to get over, get around a vehicle, and return safely to the proper lane of travel. See Texas Transportation Code Sec. 545.051.

What Damages Can You Recover from a Wrong-Way Driver?

If you are hit head-on by a driver going the wrong way, you have a legal right to seek compensation for all of your damages including property damage, medical bills, pain and suffering, physical impairment, wrongful death, and lost wage-earning capacity. In addition to these typical personal injury damages, you may very well have a claim for punitive damages for the reckless and grossly negligent conduct of the driver. If the driver was under the influence of alcohol or drugs at the time, a jury is more likely to want to punish the driver.

Talk to an Attorney

If you have been injured by a wrong-way driving accident, call a car crash lawyer for a free consultation. Our staff is prepared to discuss your case at no charge. If we take the case, we put up the litigation and investigation expenses and you do not pay these expenses back nor pay any attorney fees unless we make a recovery for you from which to pay them. Call now: (713) 932-0777.