What If I Was Involved in a Car Accident Due to a Malfunctioning Traffic Light?

A malfunctioning traffic light can wreak havoc on normal intersection traffic flow. Intersection collisions are often difficult enough to sort out when everything is working properly due to varying stories of drivers. However, car wreck attorney can help determine who is liable for a car accident caused by malfunctioning traffic signal lights. This can be difficult due to the confusion regarding a driver’s duties when traffic lights malfunction. When traffic signals blackout or malfunction, the individual drivers and/or pedestrians navigating the intersection may also be liable. In some cases, the government entity (City, County, or State) are liable.

What are Common Causes of Traffic Light Malfunctions?

There are many reasons why signal lights malfunction. Sometimes they malfunction and show incorrect or emergency signals due to the failure, other times they have a complete traffic signal blackout—where the lights are completely off. Common causes of signal light malfunction include:

Sometimes the cause is unknown. However, regardless of the cause of the signal malfunction, the Rules of the Road dictate how drivers should respond to the situation.

What to Do When Traffic Control Devices Are on But Malfunctioning?

The general rule with traffic signal malfunction is that the drivers are still required to follow the rules of the road. If the light malfunction results in flashing red or yellow lights, the driver is charged with knowing that they:

The Texas Transportation Code Sec. 544.008.  sets this forth as follows:

(b)  The operator of a vehicle facing a flashing yellow signal may proceed through an intersection or past the signal only with caution.

(c)  This section does not apply at a railroad crossing.

If you cannot see what color the light is for the cross traffic, you should assume they have right of way until you see them bring their vehicle to a complete stop at the intersection.  Assuming otherwise could cause a collision that both you and the other driver may share liability for.

When all drivers have a red flashing light, this is treated as a four-way stop. (discussed more below) You must stop and proceed safely only when you have right of way to do so and it is safe to do so.

What to Do In the Event of Total Traffic Signal Blackout 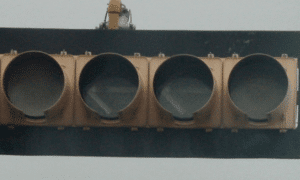 Who Has Right of Way at a Four-Way Stop?

The general rule is that whoever arrives and stops at the intersection first has right of way. If two or more vehicles arrive at the intersection at the same time, the vehicle on the left must yield the right-of-way to the vehicle on the right. If by chance four vehicles arrive at the same time, you had better only proceed if you are sure everyone is going to wait on you. 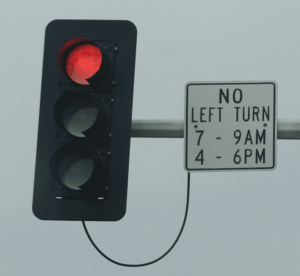 The Rules of the Road are created to prevent accidents.  While violation of some very obvious Rules of the Road such as “not running red lights” can be the basis of negligence per se claims, not all such violations are clear and easy to follow when traffic signals are malfunctioning.  An accident caused by malfunctioning traffic signal lights often results in different people giving different versions of what happened such as both people claiming the other had the red light or duty to stop. This is what is commonly known as a “red light swearing match.”

If you can prove which driver failed to follow the able Rules of the Road, then the offending driver may be held liable. However, proving that your story is right and theirs is wrong often requires an independent eye-witness to corroborate your story. Even when you have a witness and can prove the other car did not yield, this may not alleviate you of responsibility since you have a duty to keep a proper lookout at all times.  Thus, when in doubt, yield the intersection to avoid being in a difficult liability situation.

Liability of the Government for Malfunctioning Traffic Lights

When an accident caused by malfunctioning traffic signal lights happens, often people want to blame the government entity responsible for the light maintenance for the accident.  Proving that a government entity is liable is very difficult. Just because they put the signal up, does not mean they are liable when it malfunctions.

Governmental entities in Texas and many other states enjoy immunity from certain liabilities. A governmental entity is only liable for a malfunction traffic signal that they maintain when they are aware of the malfunction and fail to take reasonable steps to correct the malfunction. For example, if a report is made to a city traffic department that the signal light is out and they fail to timely dispatch a crew to fix the issue, then they are liable. However, if they promptly dispatch a repair crew and someone gets in a wreck before the crew can get there, the city would not be liable. Thus, blaming a malfunctioning traffic signal for causing an accident is generally not good for a plaintiff in a case. 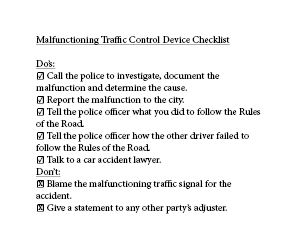 When you are in a collision involving a malfunctioning traffic signal, it is important that you get the cause of the malfunction investigated and that you make it clear to the office that you followed the rules and the other car did not. Do not give statements to any insurance adjusters who might try to trick you into saying harmful things to your case. When you do talk to the office, do not blame the signal failure. If both drivers follow the Rules of the Road, no accident will happen. You can expect the police report to have some errors if you do not clarify that you did what the law required of you and they did not. You can also expect the other driver to tell a different story.