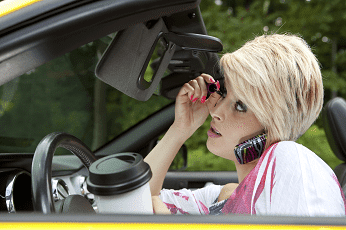 What is Distracted Driving?

With the ever-increasing use and prevalence of cell phones, talking and texting while driving has become a hot issue across the United States. Some people have even been charged with negligent homicide for using a cell phone and causing a crash. But there are many other forms of distracted driving that constitute negligence too. These include doing other activities unrelated to driving while operating a vehicle such as:

The AAA Foundation For Traffic Safety (AAA-FTS) has published a very sobering report this week – teen drivers are even more distracted behind the wheel than previously thought.

The AAA-FTS analyzed in-vehicle event recorders in 1,691 moderate-to-severe vehicle accidents between August of 2007 and July of 2013 involving drivers ages 16-19.

According to the AAA-FTS, the National Highway Traffic Safety Administration had previously estimated that distracted teen driving accounted for only 14% of crashes involving teens. That is a 44% variation from what the Foundation observed. Peter Kissinger, the AAA-FTS president, notes that “[t]he in-depth analysis provides indisputable evidence that teen drivers are distracted in a much greater percentage of crashes than we previously realized.”

This is terrifying news considering car accidents are the leading killer of teens. Over 3,000 teens die a year in car accidents and crashes and cost our country about $30 billion per year – $3 billion of that annual cost is in Texas alone. Distractions noted include:

The report concluded that when it came to engaging in distracted driving there was no difference between male and female teen drivers. However, female drivers were more likely to participate in a distraction such as grooming or singing while driving.

The study found that cell phone use was particularly distracting and dangerous for a teenage driver. Drivers using or looking at cell phones “looked away from the forward roadway excessively” and “spent an average of 4.1 seconds out of a final 6 seconds before the crash looking away.” Alarmingly, teen drivers “exhibited no reaction at all before impact in over half of rear-end crashing involving cell phone use.”

Texas has enacted a statewide law that prohibits the following:

Thus, talking on a cell phone is not prohibited for adult drivers with over 6 months of driving experience despite the risk of distraction.