Who is at Fault for an Intersection Collision?

Injured Due To An Intersection Accident?

Table of Contents show
1 Different Ways Intersection Collisions Happen
2 Failure to Stop at a Red Light or Stop Sign
2.1 What is a Red Light Swearing Match?
2.2 How Do You Prove a Swearing Match Case?
2.3 Using Cameras to Prove Who Ran the Red Light
2.4 Swearing Match at Trial
2.5 Intersections with No Signal
2.6 City Liability for Signal Out
2.7 Can the Driver with a Green Light Also Be at Fault?
3 Turning Across Traffic
4 Failing to Maintain a Safe Distance
5 Failure to Watch for People Crossing the Street
6 Conclusion

According to the Federal Highway Administration, roughly 35,000 people are killed each year due to automobile accidents. Approximately 50% of all fatal automobile crashes occur at an intersection. Thus, intersection collisions are a serious cause of death in the United States.

There are several different ways an intersection collision may occur.  The most common ways are the following:

Regardless of the reason, every intersection is preventable. However, each type of intersection collision may present its own challenges in determining liability.

Failure to Stop at a Red Light or Stop Sign

Anytime there is a red light or a stop sign, the driver has an obligation to bring his car to a complete stop before proceeding. Failure to stop for a red light is negligence as a matter of law.  A yellow caution light means you may proceed with caution. As a general rule, if you cannot clear the intersection before the light changes, you should probably stop.

What is a Red Light Swearing Match? 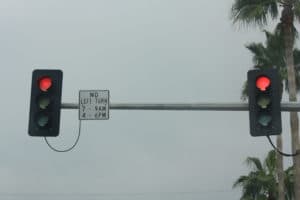 A red light swearing match refers to an intersection collision wherein both drivers claim that they had a green light. These cases often pose a big problem for those involved. Generally, if one side admits they ran a red light or a stop sign, the other side’s insurance will pay for the property damage.  It also makes the personal injury claim easier to win at trial. If nobody admits fault for running a red light, then you have a swearing match. You can expect both insurance companies to deny the other driver’s respective claims without additional evidence to establish who is correct.

How Do You Prove a Swearing Match Case?

Using Cameras to Prove Who Ran the Red Light

If there happens to be a camera at a nearby store, this may catch the accident and help to prove a swearing match case. A working “red light” camera may also catch the person if one is available. However, many of the cameras you see at busy intersections are simply live feed cameras that allow traffic authorities to monitor dangerous intersections for blockages that need to be cleared. They do not typically record. Thus, an intersection camera may or may not be a way to prove a red light swearing match case.

If there is no eyewitness nor camera, then it will be your word vs the other driver. The problem with this is that when you file a lawsuit against someone, you have the burden of proof. That means in a district court you must convince 10 of the 12 jurors to agree to the verdict. If 9 jurors side with your story and 3 jurors side with the other driver, you lose. This is why lawyers often turn down swearing match cases–it is too great of a risk of losing when the odds are stacked against the plaintiff.

Intersections with No Signal

There is supposed to be a traffic control device at every intersection. However, sometimes they are downed or destroyed by vandals. Sometimes they simply malfunction or do not work. If it is clear that the light is malfunctioning or missing, every driver has a duty to stop and enter the intersection only if it appears safe to do so.  These are to be treated as a four-way stop.  The general rule with four-way stops is that the first to the intersection has right of way. If two drivers arrive at the same time at the intersection, the one on the left must yield right of way to the one on the right.

As you can imagine, the intersection with no signal can also lead to situations where both drivers claim they stopped and then had right of way to proceed. Intersection collisions should be treated the same way as swearing match collisions by the drivers—gather witnesses, look for video cameras, and always call the police and have a report made.

City Liability for Signal Out

Thanks to sovereign immunity law, a government entity is not liable when a light is out unless you can prove they had actual knowledge and failed to timely act to fix it. This is a tough burden to prove.

Can the Driver with a Green Light Also Be at Fault?

Running a red light is negligence as a matter of law. However, that does not mean the driver who runs the red light is always 100% liable for the damages. The driver who has a green light still has a duty to keep a proper lookout. As a driver approaches an intersection, this means looking both ways to be sure the coast is clear before you enter. This is basically a duty to avoid an accident when possible. Failure to do so can result in both drivers being found negligent and the jury apportioning liability between the two.

When a driver in an intersection is attempting to make a left turn across oncoming traffic, he has a duty to yield right of way. Failure to do so may not only result in a broadside collision but may also constitute negligence. However, it is not always negligent. For example, if the approaching driver has no lights on at night so the turning vehicle cannot see him, this may result in a finding that the approaching driver’s negligence was the majority cause of the collision. Thus, the facts will determine who is at fault in these situations.

Failing to Maintain a Safe Distance

One of the more common accidents we see at intersections is a rear-end collision. This typically happens when one driver is trying to beat a yellow and speeds up not realizing the car ahead has decided to stop rather than go through the yellow light. The lead car stops and the rear car slams into the back causing an accident.

All drivers have a duty to maintain an assured clear distance so that when the car ahead stops, they can stop. However, this does not always prevent a jury from finding some percentage of fault or even a majority of the fault on the vehicle ahead. For more information on this,

please read: Who is at fault in a rear-end accident?

Failure to Watch for People Crossing the Street 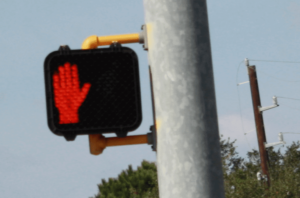 It is easy for a driver to forget that there is sometimes foot traffic that must be accounted for.  Drivers failing to look back as they turn into an intersection can lead to bicycle accidents or auto-pedestrian accidents with people crossing the street. Drivers must always be mindful of where foot traffic crosses the intersection. If there is a crosswalk, then you can bet the vehicle driver is at fault for failing to yield to someone lawfully crossing the street in the crosswalk.  If the pedestrian steps out on a “don’t walk” sign, things may be different. As you can imagine, these accidents can result in swearing match situations as well. Thus, calling the police and documenting the accident is wise.

As you can see from above, there are many issues that may arise when trying to determine who is at fault in an intersection collision. It may be one party or both parties. Ultimately, a jury may have to decide the issue.  You would be wise to consult with an auto accident attorney if you have been injured in an intersection collision. We offer free consultations. Call (713) 932-0777 for more information.