Who is at Fault in a Multi-Vehicle Accident?

Table of Contents show
1 Determining Liability in Pileups, Chain Reaction Collisions, and Other Multi-Car Crashes
2 Why Do Multi-Vehicle Collisions Occur?
3 Chain-Reaction Accidents in Traffic
4 Multi-Vehicle Pileups
5 The Law and Multiple Car Accidents
6 Stopping Suddenly
7 Who is at Fault When You Hit a Car Pileup?
8 Insurance Issues in Multiple Car Collisions
9 What Should I Do After a Multi-Vehicle Car Wreck?
10 How to Protect Yourself From a Shortage of Insurance Coverage in a Multi-Car Accident
11 Speak With An Attorney Today 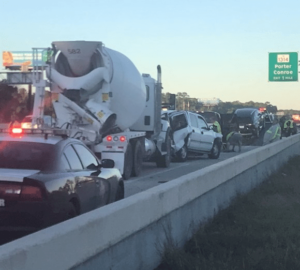 According to the U.S. National Highway Traffic Safety Administration, there are almost two million multiple car accidents every year in the United States for many different reasons.  The more vehicles that are involved, the more stories you hear about what started it, and the harder it is to sort out who hit who. A multi-vehicle accident can take days or even weeks for teams of investigators to sort out. As you can imagine, sometimes the investigators with competing interests do not agree any more than the drivers involved in the wreck. Moreover, their job in these big wrecks is to deflect liability off their insureds and onto other drivers to save their companies money. Thus, many of the victims of multi-vehicle collisions have to look to the court systems to sort these wrecks out. If someone you love has been in a multi-vehicle accident, the best thing you can do is tell them to seek a free consultation from a multi-vehicle accident lawyer whose role is to look out for their bests interests.  Tell them to call Simmons and Fletcher, P.C. today at (713) 932-0777.

Why Do Multi-Vehicle Collisions Occur?

There are many reasons multi-car wrecks may happen. It can be as simple as two cars collide in a simple rear-end accident that sets off a chain reaction collision of cars in a line. Or, it can be as complex as a multi-vehicle pile-up that happens on an Interstate in the early morning fog.  Some of the worst multi-vehicle accidents happen in Texas the low-lying parts of I-10 in the fall when the fog rolls in and stays there all morning.  Many times, there are other factors that cause them. These factors are often:

In many cases there is an initial wreck that can easily be determined as the triggering event—the drunk driver went into oncoming traffic or a car racing lost control. However, in other cases where one collision blocks the roadway and then other cars come in and add to the car pile-up, liability is not so easy to sort out.

Chain reaction accidents are collisions where one car hits another car from behind and causes it to hit the one ahead. It can involve three or more vehicles in a line. Rear-end wrecks most commonly occur in big city rush hour traffic. Chain reaction collisions occur on a daily basis in large Texas cities like Houston, Dallas, or San Antonio. Usually, because someone is following too close and not paying attention when traffic stops.

The general rule in chain-reaction collisions is that the first car to rear-end another and set off the domino effect is the party at fault. While the rear-ending car is not always at fault, this is often the case.

Multi-vehicle pileups are accidents where one collision occurs and then several other vehicles hit the original collision or “pile.”   These may occur due to several reasons such as:

Inevitably, every driver will have a little different opinion as to who hit whom first.

The Law and Multiple Car Accidents

A Sudden stop made negligently may act to bar your recovery in a multi-car collision. Even though you are rear-ended, if you slam on your brakes and cause a chain reaction or multi-car wreck, you can be found to be the negligent party who caused the wreck.

Who is at Fault When You Hit a Car Pileup?

When you hit cars piled up in the roadway, the real question regarding liability is ‘what was the time lapse between collisions?’ If it was immediate, then you will generally be considered part of the original chain of events. You may still be partially at fault for your failure to take evasive action, but you will not likely be considered the sole cause or a new and independent cause.

Under Texas law, if there is a significant time-lapse between the original wreck and the time you collide, your accident may be considered a new and independent accident for which you are responsible for failing to keep a proper lookout. This is because the negligence must be a proximate cause and not a remote cause of the injury complained of. Once the effects of the original negligence have come to rest, the original negligent actor is no longer responsible for further acts of negligence that follow by others. See Bethke v. Munoz, 2012 WL 6618160 (Tex.App.—San Antonio, 2012).  Thus, you may or may not be able to hold the car that originally caused the pileup for your injuries if you strike the pile. You may, however, be able to hold any other driver liable who comes along and hits you and causes you further injury. Thus, there may be multiple parties who bear some responsibility in such a situation, however, due to the complexity, it may have to be sorted out in court.

One of the big problems that may occur in multi-car accidents is that the liable party or parties simply do not have enough insurance coverage. In Texas, all drivers must carry minimum insurance of $30,000 per person and $60,000 per accident for bodily injury liability, and $25,000 in property damage coverage. As little as this seems like for a major accident, some states require far less. For example, California only requires minimum limits of $15,000 per person and $30,000 per accident in bodily injury, and another $5,000 in property damage.   That is not going to do much to cover damages done when a multi-car collision occurs.

Another thing you need to know is that once the limits of coverage are gone, they are gone. An insurance company does not have to fairly disburse funds to everyone their insured injures or does property damage too. In fact, under the Texas Stowers Doctrine, an insurance company must consider the first Stowers Demand they receive on its own merit as if no other claims will be forthcoming.

When the adjusters get word of the magnitude of the collision, they will likely begin calling around trying to take driver’s recorded statements to use to prove that their client is not at fault or at least not the only one at fault. Their goal will be to lead and trick people into saying things that harm their own case. Anyone who has not sought legal advice is susceptible to being tricked into saying something damaging or settling their claim orally before knowing the full extent of their damages. An oral release of a claim is valid and binding.

What Should I Do After a Multi-Vehicle Car Wreck?

Anytime you are in a multi-vehicle car wreck, you should:

The best thing you can do to protect yourself from this happening is to purchase coverage to protect you and the people in your vehicle.  Your own passenger can sue you for damages if you cause the auto collision in addition to other drivers. Thus, you need higher liability insurance limits to protect you from this. Second, raising your PIP and underinsured motorist coverage limits can afford you more protection for when someone else causes a multi-car accident and does not carry enough coverage.  Talk to your insurance agent before you get in a wreck to get these protections.

Speak With An Attorney Today

As you can see from the discussion above, multi-car collisions can result in a big liability mess.  Before you find yourself in a situation where your own words are being twisted and used against you, call today for a free consultation about your case.  Our accident attorneys are prepared to look at your case for no consultation fee. We also work on a contingency fee. Thus, if we do not make a recovery, we do not charge you a dime. Call now: (713) 932-0777.