Is a Verbal Agreement to Settle With an Auto Insurance Adjuster Binding?

Is a Verbal Agreement to Settle With an Auto Insurance Adjuster Binding?

Table of Contents show
1 Can An Adjuster Record Your Phone Conversation With Consent?
2 Gilbert v. Fitz
3 When is a Verbal Agreement Binding in Texas?
4 Lessons of Gilbert

A verbal settlement of a personal injury or property damage claim in exchange for money offered given to an insurance company is a binding agreement. You do not have to sign a formal document for the settlement to be enforced against you in Texas.

Can An Adjuster Record Your Phone Conversation With Consent?

In the State of Texas, an adjuster does not have to ask for your consent nor permission to record a phone call with you. This may be different in other states.  (See: Recording Phone Calls Without Consent. for more information.) 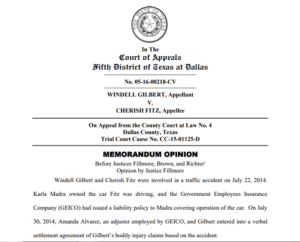 In the case of Windell Gilbert v. Cherish Fitz, 2016 WL 7384167 (Tex.App.—Dallas), The Dallas.) Court of Appeals held that where a plaintiff has agreed to a verbal settlement of his “reasonable medical expenses” incurred on the date of the accident “plus $500.00,” he was bound to that agreement. Gilbert was in a car accident with Fitz. He suffered a fractured rib cage, fractured wrist, and neck pain. He went to the hospital and incurred roughly $5,000.00 in medical expenses on the day of the wreck.  8 days after the collision, while dealing with a GEICO claims adjuster who called him and recorded the conversation, Gilbert verbally agreed to settle his claim for the medical bills he incurred on the day of the incident plus $500.00.   Subsequently, he required additional medical care to the tune of another $10,000.00. After being poorly advised by a lawyer that the release “would not stand,” he filed a lawsuit.

The attorneys for the defense answered the lawsuit and filed a counter-claim for breach of the verbal settlement agreement.  Breach of Contract, even an oral contract is a cause of action that allows the party to seek attorney’s fees for if they prevail.  The defense then filed a motion asking the trial Court to grant Summary Judgment on the verbal agreement to settle and award them $10,000.00 in attorney’s fees (which are recoverable in a contract dispute, not in personal injury claims.)  The Court granted the Motion.

When is a Verbal Agreement Binding in Texas?

A verbal agreement is binding in Texas so long as the three requirements of a contract are met:

Consideration in the context of a contract means that each side offered to give the other something of value. Typically in a settlement agreement, the consideration is that one side agrees to give up a right to sue while the other agrees to pay a sum of money. Offer and acceptance have their colloquial meaning.

In the Gilbert case, the court found all elements of a binding verbal contract were present.

If you have been in an accident and need a lawyer who represents car accident victims, call Simmons and Fletcher, P.C. for a free consultation.