Arbitration of a Personal Injury Case 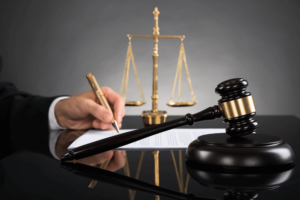 Arbitration is a form of alternative dispute resolution (ADR) in which an arbitrator or a panel of arbitrators renders a decision to resolve a dispute between parties. The arbitrator is a neutral third party who plays a role similar to that of a judge. However, the arbitration process is more relaxed and informal. Arbitration is generally a more efficient and less costly process than taking a dispute to trial.

What Types of Arbitration are There?

What is the Arbitration Process?

Whether arbitration is binding or non-binding, the process is the same. The arbitrator will be selected in the manner agreed to by the parties, and will preside over and provide the rules and procedures for the arbitration process.

An arbitration hearing is similar to a trial, in that the arbitrator or panel listens to statements from the parties, reviews evidence, hears witness testimony, considers reports or testimony from experts, and renders a decision based on that evidence. However, it often takes place in a conference room vs a courtroom. Usually, the party who bears the burden of proof presents their arguments first. If the arbitration is binding, the arbitrator or panel will issue a ruling which is enforceable in court.

The key difference between this process and a courtroom trial is that the rules are relaxed. For example, evidence may be submitted to the arbitrator that might not be admissible in court, because the party lacked a technical foundation for the evidence or faced some other procedural obstacle. While a judge might rule the evidence inadmissible and not consider it or submit it to the jury, the arbitrator receives the evidence and makes a decision about how much weight to afford it.

What is the Difference Between Arbitration and Mediation?

Mediation is another type of ADR, and it is not unusual for the terms “mediation” and “arbitration” to be confused, or the lines between the two processes blurred. Mediation differs significantly from arbitration, in that a mediator does not consider any evidence and make a ruling, or even recommendation. Instead, a mediator attempts to facilitate an agreement between the parties. Any resolution that arises out of mediation is strictly voluntary and is the result of a compromise between the parties.

What are Mandatory Arbitration Clauses?

A mandatory arbitration clause is a provision in a contract that requires the parties to the agreement to waive their right to sue one another in the event of a dispute and, instead, to submit their dispute to an independent third-party arbitrator.  In order to reduce the cost lawsuits bring, many companies write mandatory arbitration clauses into their contracts. They can be commonly found in credit card agreements, service and lending agreements, and even employment contracts.

What are the Advantages of Arbitration?

Arbitration offers several advantages when parties choose to make use of the process. For example:

Problems with arbitration are more likely to arise when one party has far less bargaining power than the other, as in the case of consumer contracts which not only mandates arbitration but may limit the options for choosing an arbitrator to services that regularly do business with and have a financial stake in maintaining good relations with the company.

Do I Need an Attorney for Arbitration?

The more relaxed nature of the arbitration proceeding makes it easier and more inviting for a party to proceed without an attorney. However, there are several reasons that a party—particularly an individual or small business owner—might want to consider hiring an attorney to represent him or her in arbitration:

If you are considering arbitration or are facing mandatory arbitration of a dispute, consulting with an experienced attorney in advance will better equip you to make good decisions about how to proceed, including whether you may need legal representation at the arbitration hearing.