What is Hypoxic-Ischemic Encephalopathy?

Hypoxic-Ischemic Encephalopathy (HIE) is a type of brain injury that is caused by oxygen deprivation. Although this term is most commonly used in connection with brain damage occurring to children at birth, hypoxic-ischemic encephalopathy can also occur in older children and adults, particularly as a result of failure to monitor a patient’s breathing after surgery in the post-anesthesia care unit (PACU).

Depending on the seriousness of the injury, HIE may cause a variety of symptoms, and may resolve in a relatively short period of time or may have lifelong consequences.

How Does Hypoxic-Ischemic Encephalopathy Happen During Birth?

Acute deprivation of oxygen to the brain at birth is a common cause of hypoxic-ischemic encephalopathy. A newborn can compensate for brief periods of oxygen deprivation. However, sustained asphyxia may damage brain tissue.

What Are the Complications of Fetal Hypoxic-Ischemic Encephalopathy? 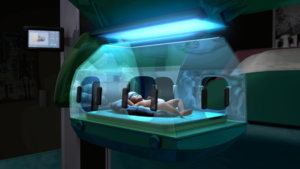 The full impact of HIE is not always apparent at birth or shortly thereafter. Often, cognitive and motor impairments become noticeable as the child ages. Some common symptoms and impairments include:

Hypoxic-ischemic encephalopathy can also be fatal. In some cases, an infant may show no signs of distress initially, or only show signs of mild HIE, but deteriorate rapidly.

Can Damage from Hypoxic-Ischemic Encephalopathy be Treated?

Deficits caused by severe hypoxic-ischemic encephalopathy are typically permanent. Most treatment for HIE revolves around adaptive therapies and medical monitoring and management of symptoms to prevent further damage, including control of blood pressure, management of seizures, blood sugar maintenance, and prevention of cerebral edema. You should consult a qualified medical professional to determine the best treatment option for you.

Often, HIE that occurs at birth is avoidable and results from inadequate prenatal care or mistakes made during labor and delivery. If you suspect your child suffered hypoxic-ischemic encephalopathy due to medical negligence during childbirth, call us for a free consultation.

How Does Hypoxic-Ischemic Encephalopathy Happen in Post-Surgical Patients?

Both anesthesia and post-surgical pain medications can cause respiratory depression. That’s just one of many reasons that post-surgical patients must be monitored closely. Often, they are placed in a special unit after surgery, called the Post-Anesthesia Care Unit (PACU). Even so, complications are sometimes overlooked.

Some of the most common ways that hypoxic-ischemic encephalopathy may occur after surgery include:

Significant oxygen deprivation associated with these and other post-operative complications can typically be avoided with active monitoring and prompt response to any warning signals. If you suspect that your loved one suffered hypoxic-ischemic encephalopathy due to failure to monitor in the Post-Anesthesia Care Unit, call Simmons and Fletcher, P.C. for a free consultation.

Other Causes of Hypoxic-Ischemic Encephalopathy in Adults and Older Children

Although medical complications are the most common cause of HIE, it is possible to sustain this type of brain injury in other circumstances resulting in oxygen deprivation. Some examples include hanging and other types of strangulation, drowning, and suffocation.

What are the Long-Term Effects of Hypoxic-Ischemic Encephalopathy?

While the severity of the effects of hypoxic-ischemic encephalopathy varies, this type of brain injury often necessitates lifelong medical care and monitoring. In addition, many victims of HIE are unable to work for a living or see their earning capacities significantly decreased.
When HIE occurs as a result of medical malpractice or another type of negligence, the victim and his or her family may be entitled to compensation, including:

Talk to a Brain Injury Attorney

This type of case generally involves complex medical and scientific evidence and requires the involvement of both medical and economic experts. With the guidance of a knowledgeable attorney, you can focus on the day-to-day medical and personal needs of your loved one and the rest of your family. Call Simmons and Fletcher, P.C. to discuss your options today. 800-291-0111. The consultation is free and we charge no fees unless we make a recovery in your case.