The Dangers of Unsafe Lane Switching

Improper lane switching causes thousands of accidents per year, many of them resulting in severe injuries or death. What is an unsafe lane switch, and who is most likely to suffer harm as a result?

Any drivers education course will likely include some guidance on the importance of checking blind spots before merging into another lane of traffic. Many modern vehicles now have blind spot cameras or mirrors, usually on the side mirrors, but plenty of drivers still rely on a quick glance over their shoulder to let them know it is safe to merge. Why, then, do lane change-related accidents happen?

Distraction is a factor in over 57 percent of lane switching accidents. Of those accidents, over 21 percent involved the use of a mobile device while driving. Drivers who check their blind spots thoroughly by looking out the window or checking the side mirrors before merging are also significantly less likely to be involved in a car accident than those who do not.

What Makes a Lane Change Unsafe?

Traffic laws are created and enforced at the state level, meaning the legal definition of what makes a lane change unsafe is up to each state. Generally, a lane change is considered unsafe if the driver does not check their blind spots before merging or if they fail to signal beforehand. “Cutting off” drivers in the other lane, violating the right-of-way, or changing lanes in violation of a posted sign are also unsafe behaviors that commonly lead to otherwise avoidable collisions.

When someone merges unsafely, they run the risk of colliding with other vehicles. If someone sees another driver merging toward them, they may swerve to avoid the driver and end up in an accident anyway. There is also the possibility of other drivers being forced over in the far left or right lanes by someone merging unsafely, causing other drivers to collide with the guardrail. 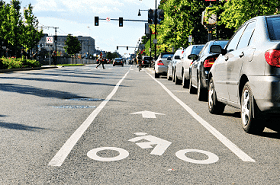 Although any driver is at risk when someone else makes an unsafe lane change, the consequences can be especially serious for bicyclists and motorcyclists. Because they are not surrounded by metal and other protective materials when they are on their vehicles, they are left exposed to the elements and unsafe motorists.

When checking blind spots, drivers should pay extra attention to watch for bicyclists and motorcyclists, as they often appear smaller than the average vehicle and can easily escape notice. A fatal July 2022 accident in Houston, Texas exemplifies this. The victim was riding a bicycle on the freeway when he was struck by a Jeep attempting to change lanes. He was pronounced dead at the scene.

Can You Get a Ticket for Unsafe Lane Switching?

The penalties for unsafe lane changes vary by state. In some states, a driver making a dangerous lane switch may be fined just $25, while in other states, the fine can go up to hundreds or even thousands of dollars. Given the dangers of unsafe lane switching, most states take it seriously and leverage fines or other legal consequences accordingly. Texas, for example, may impose fines up to $200 and mark up to two points on a driver’s license for an unsafe lane change.