Table of Contents show
1 Pit Bulls in the Media
2 Pit Bull Background
3 Why Pit Bulls May Attack
3.1 Misuse as a Fighting Dog
3.2 Improper Training by the Owner
3.3 Tethering
4 Talk to an Attorney

Pit Bulls in the Media 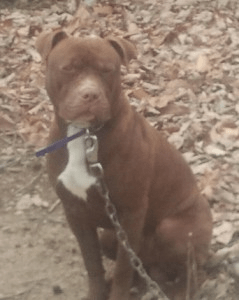 Chaining or “tethering” a dog can often make them more aggressive.

The American Pit Bull Terrier commonly referred to as the “Pit Bull” is a dog with very jaws.  These dogs have garnished media attention in the past because the breed has been associated with a number of severe attacks and even some deaths. When these dogs are not properly raised, trained, and kept by their owners, they can do serious damage in a dog attack.

When any dog attacks someone, you have to look at the circumstances surrounding the attack to determine why it happened.  Some questions to ask are:

All of these issues may come into play in assessing whether the owner is responsible for the bite.  At Simmons and Fletcher, P.C., we have experience looking into these issues to determine why an attack happened.  Call us today to talk to a dog attack lawyer at 713-932-0777.

Pit Bulls have their origins in England. It is the product of breeding between English Bulldogs and Old English Terriers. These dogs were originally bred and trained as “catch” dogs which are dogs that catch large animals such as hogs or wild cattle and can also be used during hunts. Pit bulls have also known under the following names: American Pit Bull Terrier, Pitbull, Pit Terrier, Bull-and-Terriers, Half and Half, Bull Baiter Dogs, Yankee Terrier, Rebel Terrier New Yorkies, St. Francis Terriers and Staffordshire Fighting Dog.

Why Pit Bulls May Attack

Misuse as a Fighting Dog

In the past, pit bulls were bred and used as fighting dogs.  Unfortunately, illegal dog fighting rings today still exist.  Often, they still use pit bulls for their operations.  If you run across a dog that has been mistreated and used for dog-fighting, they may attack wholly without any provocation simply because it is what the criminal owner taught them.  This is also why it is good to ask about the origins of a dog when adopting.

Improper Training by the Owner

In addition to the above, dogs may attack if they believe they are protecting their owner or home, they feel threatened, or if they simply are improperly trained and socialized. Like any breed of dog, pit bulls can become overly aggressive simply because the owner does not understand how to properly handle or train the dog. When the owner is aware of a vicious or aggressive tendency, he or she must prevent the dog from access to the public and warn people of the dangerous nature of the dog.

Chaining dogs can further encourage aggressive behavior. Tying or chaining a dog to a stake or post is not a proper way to keep a dog. It puts the dog in a situation where if it is in fear, it cannot retreat for its own safety.  The “fight” or “flight” instinct that all animals have when in danger becomes a “fight only” option when they cannot retreat. This can actually make a dog more aggressive. A dog attack lawyer can help you investigate and determine whether the dog attack in your case is a result of bad training, breeding, or simply negligent ownership.

Talk to an Attorney

At Simmons and Fletcher, P.C., we are experienced in handling pit bull and other dog attack cases. We have helped many victims of attacks recover from negligent dog owners who failed to keep their dogs properly restrained and failed to warn people of their vicious tendencies. If you need to speak to a dog bite lawyer in Houston about your rights, call us. We serve all of the State of Texas when it comes to handling these types of claims and will assist others outside the state in the case of a serious attack by a dog. The initial consultation is free and when you hire us to handle your case, we charge no attorneys fee nor litigation expenses unless we make a recovery for you. Speak to our attorneys today by calling: (713) 932-0777.