Doberman Pinschers are medium-sized dogs known for their elegant appearance, endurance, and speed. The breed dates back to the 1890s, and Dobermans have a history as both guard dogs and police dogs. Because they were originally bred to be protective, Doberman Pinschers are fearless and are wildly stereotyped as aggressive animals.

Despite the stereotype, Doberman Pinschers remain popular pets today due to their loyal, alert and intelligent nature as well as their protectiveness. When properly trained, Doberman Pinschers can be loyal defenders and yet also respectful of their humans.

Unfortunately, some are not properly trained and, although they rank low on the scale of owner-directed aggression in a study of Breed Differences in Canine Aggression, they rank high on the scale of aggression directed at strangers. An aggressive Doberman can do significant harm to a person if the dog decides to bite.

If you or a loved one has been the victim of a Doberman Pinscher attack, you need to seek legal assistance to understand and protect your rights. Call for a free consultation at 713-932-0777. 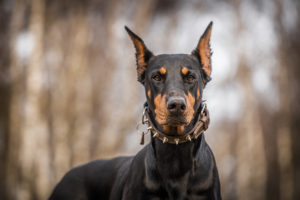 When you do suffer injuries as a result of an encounter with an aggressive and dangerous Doberman Pinscher, the dog’s owner may be liable to you for your losses.  The law takes into consideration factors such as whether the dog was running at large, whether it had show aggression toward a human before, and whether the dog was provoked by taunting, teasing, or aggressive action toward the animal.

An attorney who handles dog bite cases can help you to understand what types of damages you may be entitled to claim and can assist you in taking steps to protect your rights.

Let Us Represent You After a Doberman Pinscher Attack

At Simmons and Fletcher, P.C., we understand that the consequences to your health may not just be physical but may also be emotional as well. We know how much harm a dog bite can cause, and we will do everything possible to fight for your rights. Call us to discuss your Doberman Pinscher attack case today for no charge: (713) 932-0777.